Pilgrims travelling between Mecca and Medina in Saudi Arabia can now recharge and top up their phones at forty stations featuring incredibly durable ZyBrid custom designed Projected Capacitive Technology (PCT) touch sensors from Zytronic. The stations, the first to be installed along the pilgrim route, were designed and manufactured by Slovenian system integrator Lastinski, on behalf of United Yousef M. Naghi Co. Ltd, a leading consumer electronics group based in Jeddah, Saudi Arabia.

The distance from Mecca to Medina is 280 miles (450km) and it is a journey that many Muslims make as part of their Hajj pilgrimage. Today, most pilgrims have mobile phones with them on their journey, which will require charging during the Hajj, as well as perhaps adding extra credit. United Yousef M. Naghi Co. Ltd identified this unusual application and commissioned Lastinski to create outdoor mobile phone charging stations to help pilgrims keep in touch with family and friends during their pilgrimage. 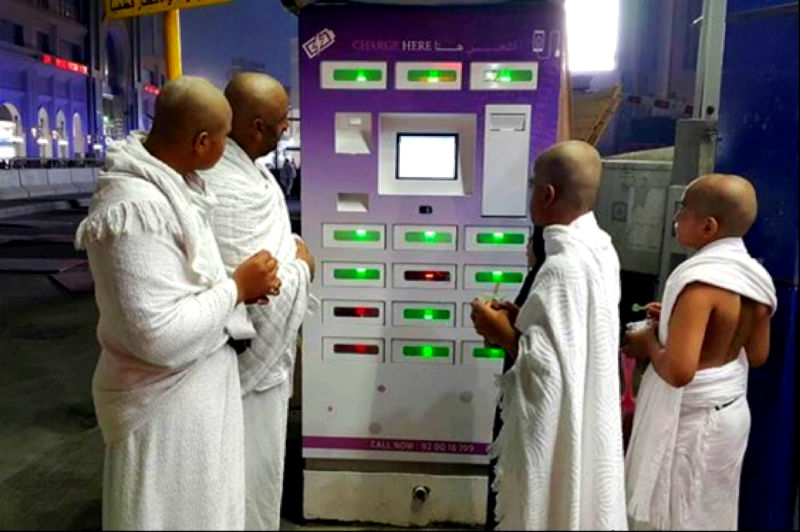 Commenting, Mitja Veber, managing director of Lastinski, said, “This is a pioneering project – these are the first outdoor charging stations to be built alongside this busy pilgrimage route. A reliable touch screen is central to delivering a good experience to the users of the stations. Zytronic touch sensors are very rugged, and have proved fully able to withstand the tough conditions, and operate well through the 8mm glass overlay. We believe that the terminal design we have created is unique and has enormous potential for travellers in other locations including airports and railway stations.”

He added, “A key challenge in the design of this project was configuring a single computer to manage three separate user interfaces on three separate screens. Using the ZyConfig software tool provided by Zytronic, we were easily able to set up three touchscreen configurations to be driven from one computer.”

In addition to charging, the locations also offer the ability to top up mobile phone credit and buy pre-paid SIM cards. There is even a facility to communicate with other pilgrims and leave them messages. Lastinski delivered the stations as a turn-key project. They undertook all of the system design including the ruggedised casing and custom electronics, took care of the final assembly and delivery to various remote sites.

The project involved the construction of forty sets of thirty stations, each with three screens – two 10” displays and a 21” LCD. The smaller screens open the charging stations, whilst the larger one provides access to a wider range of services. All three are controlled by a single computer, providing a flexible platform that will allow additional functions and features to be added very easily. A fingerprint reader is used to provide secure access to the stations.

Notably, as the phone charging terminals are located outdoors, and exposed to Saudi Arabian summer temperatures that can exceed 50°C, the touch displays are carefully cooled. To prevent accidental or malicious damage, each ZyBrid touch sensor is mounted behind, and operates through, an 8mm thick protective glass overlay.