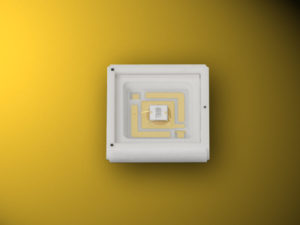 Introducing a performance of 100 mW, LG Innotek, industrial partner of LASER COMPONENTS, sets new standards for single-chip UVC LEDs. The manufacturer states that this development is two years ahead of current industry forecasts. So far, experts had assumed that similar output powers would not be achieved until 2020.

Optimised chip design leads to considerable increase in UV output, while waste heat is discharged effectively, and therefore granting stable performance over long periods. One such UVC LED can emit strong ultraviolet light at 278nm for more than 10,000 hours.

UVC light destroys the DNA of bacteria and other germs. LEDs of this spectrum are mainly used for the disinfection of air, water and surfaces. Due to powers of just a few milliwatts, only motionless water and air masses could be sterilised. The new, high-performance radiation sources allow for new applications such as use in air conditioning systems or purification of running water.