What are the design benefits from using “supercapacitors”?

Bernd Heim at Avnet Abacus looks in detail at the development and growing use of super capacitors and examines EDLC technology to better understand its technical characteristics and how these contribute to the features and benefits of commercial products targeted at a growing number of new markets and applications. In doing so he also focuses on some selected products from leading manufacturers including Panasonic, Murata, Nichicon, Cooper Bussmann, and AVX.

Supercapacitors are devices, which on the energy storage spectrum, bridge the gap between rechargeable batteries and more traditional capacitor technology, such as electrolytic capacitors. The most common form of supercapacitor is the electric double-layer capacitor (EDLC), which stores electrical energy electrostatically through the separation of charge in a double layer interface between a conducting electrode and an electrolyte solution.

Supercapacitors were first marketed in the late 1970s, and the EDLC effect was observed some while before that, but it is only in the past decade or so, with the increasing importance of providing backup power for more and more electronic equipment and a greater consciousness about energy management, that supercapacitors have become widely available and used in a broad range of key applications, including: Intelligent metering, energy harvesting, renewable energy and a wide spectrum of industrial sectors.

What are supercapacitors and how do they work?

The Electric double-layer capacitor (EDLC) is a type of electrochemical capacitor that stores energy electrostatically without employing a chemical reaction. Such supercapacitors do not have a conventional solid dielectric; rather their construction uses an electrolyte solution and conductor electrodes. The EDLC description refers to the charge separation that occurs in a Helmholtz double layer at the interface between the electrode and electrolyte. This double layer is very thin, less than a nanometre, and consequently electrodes with a large surface area, such as those made from activated carbon, yield very large capacitance values relative to their volume.

The basic principles of supercapacitors have been refined over the years as manufacturers compete to produce devices with ever better performance. For example, optimising the pore size of the activated charcoal and the thickness of the electrodes can reduce the equivalent series resistance (ESR), allowing even faster charge/discharge rates and improved operation at low-temperature. Similarly, the use of propylene carbonate-based solvent for the electrolyte rather than the more usual acetonitrile electrolyte, provides a number of benefits: its lower viscosity contributes to lower resistance and unlike acetonitrile, which can give off toxic gasses if burnt, it provides safer solution with lower environmental impact.

How do supercapacitors differ from other energy storage devices?

The electrical characteristics of supercapacitors provide performance that lies between the energy storage capabilities of traditional capacitors and rechargeable batteries. They enjoy the fast charging characteristic of regular capacitors but with the increased storage capacity normally only associated with battery technology. Compared to other capacitor technology, supercapacitors have the greatest energy density (capacitance/unit volume), enabling capacitance values up to 10,000 times that of electrolytic capacitors. However their energy density is still only around 10% of a conventional battery and batteries can still provide much higher total capacities.

Where supercapacitors really win over batteries is in power density, which relates to the speed at which energy can be delivered to the load. The low ESR of supercapacitors (measured in milliohms) enables quick charging without the need for any charge protection circuitry and their ability to discharge equally quickly allows them to respond to demand in pulse power and battery assist applications. Additionally, supercapacitors have no charge/discharge cycle life limitation (i.e. no memory effect), with the consequent cost-saving benefits of a long and maintenance free service life.

Supercapacitors are also attractive compared to batteries for their low environmental impact because they contain no lead or other potentially harmful substances and are therefore compliant to EU directives such as RoHS.

Which applications can benefit from using supercapacitors?

Supercapacitors are attractive for a wide variety of applications and consequently there are products on the market that span a range of capacitance values as the examples selected for this article illustrate. At one end of the scale are devices that provide reliable, long-life replacements for the coin-cell batteries that backup real-time clocks in microcontroller systems. At the other end are higher capacity units that can power servomotors and other actuators in industrial control equipment, operating in harsh environments and over a wide temperature range.

As discussed above, the advantages of supercapacitors are in energy storage and battery replacement applications where the characteristics of long-life, reliability, low-maintenance, extended-temperature operation, low environmental impact and simple charging circuits are particularly relevant. These include smart meters, energy harvesting, renewable energy systems and a range of backup power solutions. Additionally, the superior charge/discharge characteristic provides surge capacity in industrial motor start applications, such as elevators and forklifts, and energy regeneration in electric vehicles e.g. the kinetic energy recovery systems (KERS) popularised by F1 racing. 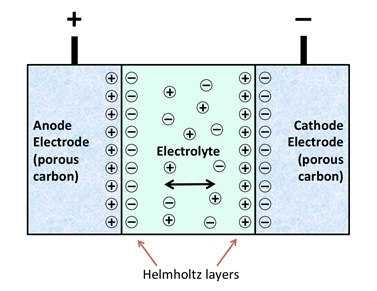 Panasonic is a pioneer and market leader in this industry with over 30 years experience in producing EDLC devices. Its Gold Cap range is promoted as the ideal green replacement for secondary batteries in systems that require a backup power source. The latest high reliability RF and RG series offer capacitances from 0.1F to 1F at rated voltages of 3.6V and 5.5V and are specified for operation over a temperature range of -25oC to +85oC with an endurance of 2000 hours at 85oC. Smart metering is just one of the many target applications for these stacked coin type devices.

Murata targets its high-reliability DMG series supercapacitors at energy storage applications requiring extended temperature and long-life operation as well as environmentally-conscious markets where the green credentials of EDLC devices, which contain no lead or other hazardous substances, are key. Measuring just 20.5 x 18.5 x 1.4mm and with capacitance values of 350mF and 700mF, the DMG series provides a very compact, space-saving solution for energy harvesting and battery load assist applications in portable electronic equipment.

Nichicon Corporation focuses on industrial backup power with its UK series of EDLC devices. These have been developed for use in applications such as smart metering that require low resistance in order to deliver near instantaneous power when conducting wireless transmission. Reliable, long-life operation outdoors at low temperature, down to -40oC are other key characteristics. More significantly, the use of a propylene carbonate-based electrolyte ensures the lowest possible resistance while also providing a safer product with lower environmental impact.

Cooper Bussmann is targeting renewable energy applications with its high capacitance PowerStor XB and XV series of cylindrical supercapacitors. With capacities of 300F and 400F, these devices are aimed at power hold up and pulse power applications in alternative energy markets e.g. for heliostat tracking in solar energy arrays and for controlling the blade pitch of wind turbines. These extremely high capacity devices provide reliable operation in harsh industrial or outdoor environments and achieve a service life of over 20 years in end-equipment without the need for replacement or maintenance.

AVX has developed its BestCap series of electrochemical supercapacitors to combine very high capacitance with ultra low equivalent series resistance (ESR), in the region of milliohms, to offer excellent high power pulse performance. These devices are intended to help boost instantaneous power availability in applications that need to respond quickly to high current demands and are often used in conjunction with battery packs to provide a hybrid power source.

Supercapacitors provide equipment designers with a flexible alternative to conventional capacitors or rechargeable batteries for energy storage, both as a backup power solution and for applications that have to cope with demand surges. The technology’s maintenance-free, long-life and environmentally friendly credentials make supercapacitors a natural choice for green energy solutions.