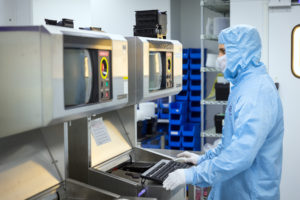 The silicon industry has dominated semiconductors for the last 50 years, and being a $350bn a year industry, it’s pretty significant. Now, compound semiconductors are beginning to take centre stage and the UK, particularly Wales, is playing a huge part in its growth. CIE editor, Amy Wallington talks to Chris Meadows, IQE plc & CSconnected about how the Compound Semiconductor Cluster in Wales is driving the market’s growth across the UK

Chris Meadows explains: “A lot of the new technologies that are emerging from healthcare technologies through to aerospace, high speed computing, quantum computing, and certainly the Internet of Things and the sensing technologies and transmission of data and so on are all going to depend more and more on compound semiconductors so we are going through another revolution like silicon did back in the 1960s. 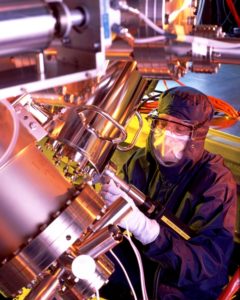 Meadows says: “The UK actually has a leading role in the development of compound semiconductors. Wales, in particular, is home to a growing number of organisations and businesses that are active in this industry sector. We think the emerging markets are in areas such as face recognition, 3D sensing for augmented reality, LiDAR for autonomous vehicles, Infrared sensing applications for safety and security at airports for example but also for health monitoring and wearable devices. These are all technologies that are based on the same fundamentals as compound semiconductors and we believe the UK does have a leading position in this. 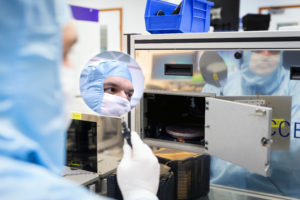 “There are three or four minor clusters in the UK; there’s some activities around Cambridge, north-east UK, Scotland, but in Wales you actually have a relatively solid cohort of industry that’s been operating in the compound semiconductor region for a number of years. And I think it came to the attention of politicians that this activity was going on and we have been actively involved in lobbying to get a greater presence and emphasis in this area. IQE initially worked with Cardiff University and the first step was a joint venture to set up development and prototyping facilities for producing next generation materials.”

Meadows explains that governments use TRLs (Technology Readiness Levels) for funding. TRLs originated in the 1960s when NASA developed it to describe where they were in the development of the space programme. He adds: “TRLs 1, 2 and 3 are really the conceptual research so in the case of the space programme, TRL 1 would have been President Kennedy saying that they would send a man to the moon and safely return him by the end of the decade; TRLs 4, 5 and 8 would be the prototyping and flight testing stage; and TRLs 7, 8 and 9 was all the pre-flight checks through to the final flight. But these levels are being used in manufacturing, certainly by the US and European governments to understand where they put their funds.” 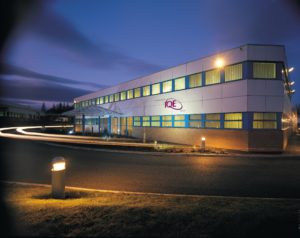 He continues: “One thing we’ve been very active with and work very closely with the Welsh Government on is developing the TRL chain to make sure that within this region, although we have a cohort of indigenous companies or businesses that have been based in Wales a long time, we make sure that we’ve got the research, development and innovation back up for that horizontally as well as the vertical supply chains, because in Wales, we have companies like Renishaw, Airbus, General Dynamics and so on, who all use compound semiconductors in their devices but currently import them in from different countries, primarily the Far East. So what we are looking at is how can we fill the gaps because at present, even though we have companies around that are working in all of these areas, it’s not joined up.”

“Working closely with the Welsh government, they were very supportive on the joint venture between Cardiff University and IQE, specifically for developing new epitaxial materials, wafer materials at TRLs 4, 5 and 6 so it is prototyping and allowing access to others to do that but to attract originally European funding but also innovate UK funding to help the development of new, next-generation products,” says Meadows. 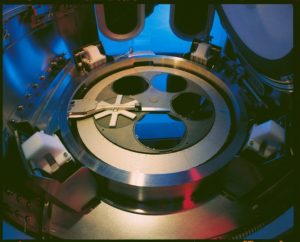 The UK government has also invested more than £50m in the first Catapult Centre in Wales, dedicated to the development of compound semiconductor applications. Meadows comments: “What we are looking at doing is offering a complete service and, if you look at its history, it’s almost developing the same way that Silicon Valley evolved. It actually took Silicon Valley 20 to 30 years to become established because when you get to a critical mass you start attracting people into the region for jobs because they’re not stuck with the one employer; they can move around and gain experience.The compound semiconductor cluster currently employs approximately 1,300 people and expects to boost the number employed across the sector to around 5,000 over the next five years. But also it starts to attract inward investors who want to tap into the whole research and development chain as well. And that’s exactly how Silicon Valley developed in the early days but it was an organic development. Within the cluster, we are working very closely together as one and we’re trying to brand the entire cluster as CSconnected so we can go out and effectively say: ‘this is happening in Wales now. We have the capabilities, why not come here to develop your next products’. And it’s really gaining traction.”

As Meadows has explained, compound semiconductors are everywhere, and emerging technologies rely on them for higher performance and higher power so it’s great that the UK can play such a big part in the industry. “It is a pretty significant industry,” concludes Meadows, “and it’s one that the UK does have a lead in and we want to make sure we maintain that lead. We’ve sadly seen it so many times; if you look at any handset or phone it will not be made in Britain. So what we’re looking at in a small way is bringing some back, a bit like reshoring. Not so much bringing it back but keeping what we have because we do have this expertise. Like I say, there are other clusters around but we work with them and they’re organic clusters but by far the biggest concentration and the biggest investment, currently around about £300m worth of investment in compound semiconductors, is right along the M4 corridor here, mainly in South East Wales. We are also working with Swansea University as well as connecting with other organisations across the UK. There are also a lot of photonic based businesses that use our materials, in areas such as North Wales where there is a very strong photonics cluster. Ironically, many photonics companies have been sourcing laser modules from Asia to use in their their products, probably not knowing that IQE in turn are supplying the materials that the modules are made from. So what we are looking at is expand what we do here in Wales and the UK. So that’s really where the cluster is coming from and the history of it and why we believe it’s an important industry sector.” Shielding and filtering are not independent of one another