RS Components has assisted Gravity’s development by providing tools, components and expertise to support the extraordinary engineering and has today unveiled a new video that showcases the ‘exo-skeletal’ suit in action. For more information about the project, the engineering journey and the technology used visit DesignSpark which also features a Q&A with Richard Browning. 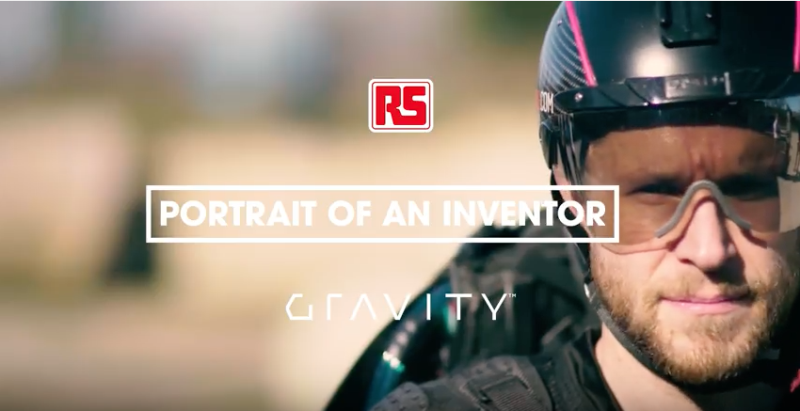 Using ‘human 2.0’ principles, the Daedalus focuses on taking and augmenting the human mind and body’s abilities, to produce something super-human. By combining four miniaturised arm-mounted gas turbine engines and two hip-mounted versions the suit provides enough lift to enable a person to hold their body weight for long periods of time, or in other words, ‘to fly’.

The suit is Wi-Fi enabled and includes a Heads-Up Display, made from Sony SmartEyeglass, that can highlight key safety and performance indicators, including fuel levels and engine operation. It also allows live data streaming from the suit for both ground monitoring and the HUD system.

The Daedalus took 12 months to build and required relentless testing, phased flights and system evolution prior to the technology patent being filed, however, the start-up has already secured hundreds of thousands of pounds of investment.

Gravity Industries founder, Richard Browning said: “This is a momentous point in aviation history. Daedalus is simply the beginning of a core technology that has endless potential in aviation, commercial and entertainment applications.

“We’ve already had a few comparisons to Tony Stark, but this is real-world aeronautical innovation. We are serious about building a world-changing technology business. We stand at the very beginning of what human propulsion systems will do. It’s at the same point as the mobile phone was in the early to mid-80’s or the internet of the early 90’s – and I have to say, it’s phenomenally exciting.”