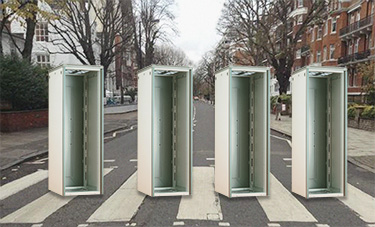 Abbey Road Studios is the most famous recording studios in the world and has been witness to countless landmark recordings over the past 85 years. From The Beatles, Pink Floyd, Radiohead and Oasis to Adele, Frank Ocean, Ed Sheeran, Amy Winehouse and Kanye West, Abbey Road has also been the destination for 100s of iconic film scores.  In the biggest transformation since the studios first opened, Abbey Road is now opening two brand new smaller studios designed to make the magic accessible to a new generation of artists, as well as a mix stage for film post production.  The mix stage takes Abbey Road’s scoring facility to the next level with complete post production sound mixing capability. This purpose built, state of the art facility is Dolby Atmos Premier Studio Certified and IMAX audio compatible. Courtesy of the Beatles, the zebra crossing close by is arguably just as well known.

As part of the new development Verotec have supplied an initial seven 47U 600 x 600 IMRAK racks that will contain the equipment and patchbays for analogue audio, digital audio, HD video, and data. The racks were supplied in two stages. The first delivery was the bare frames, configured with chassis supports in specified positions, giving easy all-round access. Once the racks had been populated with equipment and the layout finalised, the claddings, power distribution units and thermal management units were then shipped to complete the project.

Tim Armstrong, Verotec Commercial Director, said, “The IMRAK 1400 is the default choice for many audio applications. Its versatility, configurability, easy all-round access and overall strength make it ideal for applications where equipment is frequently upgraded and changed. In particular, one of its key benefits in recording studios is the fact that the front panels can be mounted flush with the front face of the rack, preserving ground continuity throughout the structure while enabling front patching.