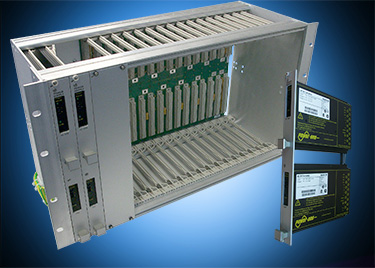 Verotec has supplied suites of five different VMEbus-based systems to a global US-based naval and marine systems integrator. The systems will be used in military shipboard applications, so meeting exacting shock and vibration requirements was a critical requirement. Each system consist of a VMEbus backplane and two military grade power converters mounted in custom plug-in modules in special subracks based on Verotec’s KM6-HD family. Extensive Finite Element Analysis (FIA) confirmed that the systems would withstand an onerous 25g shock test and also vibration to MIL-STD-167.

The systems were all 19” 6U high, 180mm deep and either 42HP half width or 84HP full width. The subracks are constructed from the KM6-HD front and rear extrusions mounted in special duplex stainless steel side plates to give the required rigidity and strength. The KM6-HD card guides are screwed down to the tiebar extrusions to further increase the stiffness of the unit.

The custom 5HP power supply modules plug in to the front of the subrack, interfacing with the backplane via rugged DIN 41612 H15 high power connectors. Each module contains two military grade converters, one providing stable, smoothed +5 VDC, the other ±12 VDC from the ship’s 28VDC supply. The half width systems are fitted with one module; the full width ones have two to support the increased current requirements of the larger system and to give an element of N+1 redundancy.

As part of the contract, Verotec also supplied mechanically identical 6U 84HP systems for onshore only use. The cost-reduced test units are constructed from the KM6-2 commercial grade subrack, two commercial grade plug-in switched mode PSUs and VMEbus backplane.