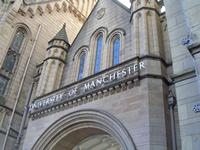 Manchester has been ranked as the top university for electronic engineering by the Sunday Times and among its academic staff are Professors Geim and Novoselov, who were awarded the 2010 Nobel Prize for Physics for their work on graphene, and Professor Steve Furber, a principal designer of both the BBC Micro and original ARM 32-bit microprocessor.

UKESF was established to help reverse the 47 per cent decline in UK students enrolling on electronic engineering courses between 2002-2008 and which poses a significant risk to the future of the UK electronics industry; which employs 250,000 people and is worth an estimated £23 billion a year.

Manchester is the eighth university to join the UKESF, alongside Bristol, Cardiff, Edinburgh, Imperial College, Southampton, Surrey and York. UKESF is also rapidly gaining industry support with new companies sponsoring the programme and offering a 70 per cent increase in scholarships and work placements in 2011.

Commenting Prof Andrew Gibson, head of Manchester’s School of Electrical and Electronic Engineering said: “We’re among the largest engineering schools in the country and our industrial links help to ensure that our students excel after graduating. UKESF membership will further strengthen these links and enhance our reputation for developing talented individuals and equipping them with the skills demanded by employers.“

Indro Mukerjee, CEO of Plastic Logic and chairman of the UKESF strategic advisory board commented: “It’s essential that organisations nurture talent at grass roots levels, and by doing so they will reap many rewards. The addition of Manchester to the list of UKESF partner universities will help us ensure the best students are given the opportunities they need to develop with world-leading companies in the UK; and this is a solid step in maintaining the UK electronics industry’s global competitiveness.”

Founded in January 2010, the UKESF aims to have 160 new undergraduate scholarships each year, with 10 UKESF partner universities and 100 sponsor companies signed up by 2014.