Ultra High Definition or UHD is set to be the next big thing in television and the University of Huddersfield is playing an important role in testing this new technology.

It has led to special transmissions to the whole of Huddersfield from the top of the University’s 15-floor tall Schwann Building. The most recent UHD TV broadcast was one of the graduation ceremonies that took place yesterday, Monday 10 July, and was viewable by all people with up-to-date TV sets within the town. 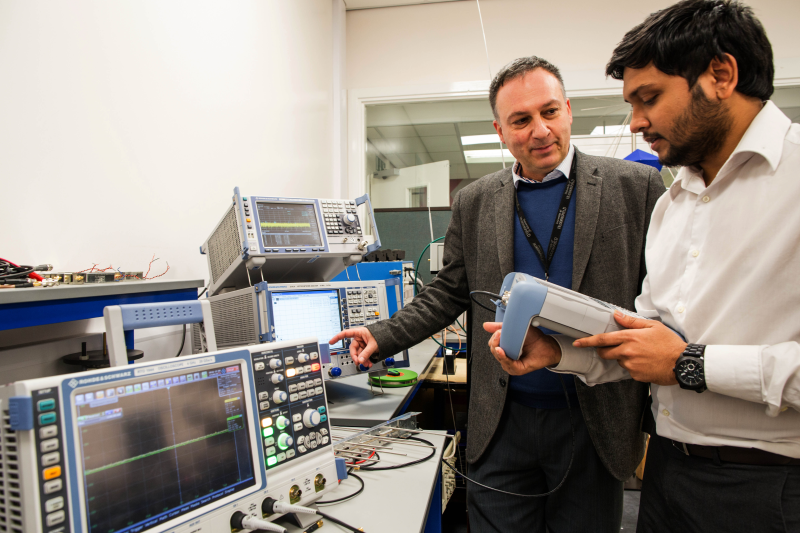 The aim of the experiment is to harvest feedback from viewers, who must tune to channel UHF 24 (manual tuning frequency 498 MHz) to watch the UHD videos. They then have the chance to give their feedback on image and sound quality via email to p.lazaridis@hud.ac.uk.

In charge of the project is Dr Pavlos Lazaridis, who is reader in Electronic and Electrical Engineering at the University’s School of Computing and Engineering and the project has been very actively supported by the Dean of the School, Professor Stephen Donnelly. UHD TV is one of Dr Lazaridis key research areas and he has forged valuable links with the developers and manufacturers of the encoders that are required for broadcasts in ultra-high definition, which offer picture resolution four times higher than that of HD TV – hence the fact that that it is widely known as 4K TV.

NEC Europe supplied the University of Huddersfield with one of its brand new VC-971 HEVC encoders and this was used for OFCOM-licenced transmissions from the University’s broadcasting test-bed.

The hope is that hundreds of viewers in the University and town will sample the broadcast and give their verdict.

“The tests conducted so far show that viewers can appreciate the difference between now-standard HD and the new UHD TV,” said Dr Lazaridis.

“It gives a bigger range of colours and has a high dynamic range. It looks more live and the colours are more natural. The TV that we are used to is very limited in colour resolution.”

“We are very interested in the University of Huddersfield experiments on UHD TV broadcasting and we think that this is an important test of future TV technologies,” said Yann Auffret, broadcast and media regional sales manager of Rohde & Schwarz.

Working with the encoding, and experiments with a wide range of settings, is PhD student Keyur Mistry, who has an MSc in Electronics and Communications from the University of Huddersfield.

Professor Ian Glover, head of Engineering and Technology and a close collaborator of Dr Lazaridis on this and other wireless communications research projects said: “Pavlos has done a fantastic job in leading this work and I am delighted to have been associated with it as his collaborator. The support that NEC and Rohde & Schwarz have given to the project has been invaluable and is a measure of the work’s importance to future broadcasting standards and systems.”

Dr Lazaridis anticipates that although the encoders are very expensive currently, the prices will, within a few years, drop to a fraction of their initial value. This will be vital to their widespread use.

“Broadcasters will need thousands of these. They will be used not just for UHD but for all kinds of programmes. Because the encoders are compressing, you can squeeze more programmes on to the same frequencies,” he explained.

He added that the tests he is conducting are of great importance because all of the broadcasting companies need to gauge the reaction of the audience to UHD.

During the experiments, the School of Computing and Engineering has been collaborating closely with the University’s Broadcast Journalism course, in its School of Music, Humanities, and Media, which is equipped with state-of-the-art 4K cameras for recording the graduation ceremonies.