The founders of Ultrahaptics, the mid-air haptic feedback technology company, were awarded the 2016 Colin Campbell Mitchell Award from the Royal Academy of Engineering (RAE) at the Academy’s AGM on Thursday 8th September 2016.  The prestigious award is presented to an individual or team of up to six engineers in the UK who have made the greatest contribution to the advancement of any field of engineering over the past four years. 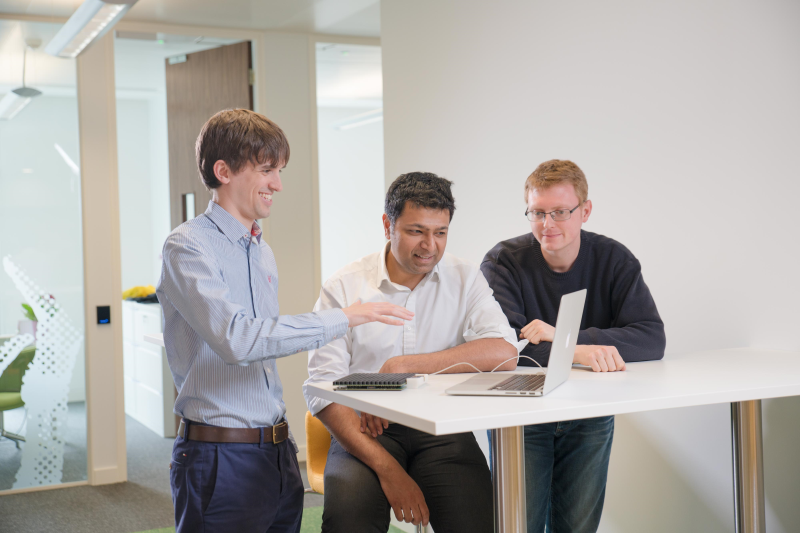 The Ultrahaptics team has revolutionised the way people interact with machines, through a novel use of ultrasound. The developed technology enables users to feel virtual buttons, switches and dials, as well as 3D shapes and virtual force fields, in mid-air. Since the founding of Ultrahaptics, there has been considerable commercial interest from global technology giants in implementing this unique new interface across a variety of markets, from home audio and appliances, to cars and 3D computing.

In 2011 Tom Carter, now CTO of Ultrahaptics, took an interest in whether it was possible to produce a tactile response using ultrasound and dedicated his PhD studies at the University of Bristol to the field. The team, consisting of Professor Sriram Subramanian, Dr. Ben Long, and Carter, went on to develop a complex suite of algorithms that enabled them to use an array of generic ultrasonic transducers to emit ultrasound in a phased pattern to produce the sensation of touch, creating three-dimensional shapes and textures in mid-air. The outcome of the research has firmly placed the UK at the forefront of international computer human interaction engineering.

The team founded Ultrahaptics in 2013 and quickly attracted seed funding from the IP group. By the end of 2014, it had received significant investments from venture capitalists and government grants, and was supported by multiple commercial opportunities for the technology. In 2014, the company announced that it was engaged with Jaguar Land Rover, who are using the technology to make gesture control in dashboards more intuitive and safer by creating haptic feedback for the driver.

“It’s a privilege to have our work be recognised by the Royal Academy of Engineering,” said Tom Carter, CTO and founder of Ultrahaptics. “We see the development of this technology as the first step on a journey which will forever transform the way humans interact with computers, and the whole team at Ultrahaptics is very excited to be at the forefront of this era of change.”

Nigel Perry MBE FREng, chairman of the Royal Academy of Engineering’s Awards committee, said: “The Royal Academy of Engineering is delighted to award the Ultrahaptics team for their innovation. Ultrahaptics’ technology has made a pioneering contribution to this hugely exciting field and provides an excellent example of how engineering research and ingenuity continues to advance the interface between society and technology.”