Almost half aren’t planning to switch to LED in next 12 months, despite upcoming halogen ban

British companies are failing to adequately prepare for the upcoming halogen light bulb ban in 2018, as 41 per cent are choosing not to switch to the alternative LED lighting in the next 12 months. This is according to new research from online electrical retailer reichelt. 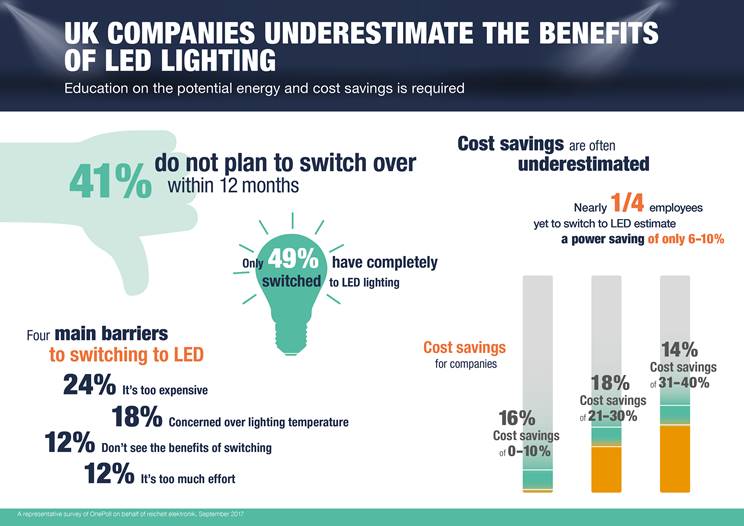 Hurdles when switching to LED

According to the research, conducted across 200 employees in the UK, many have revealed that their companies are still hesitant to switch to the more energy-efficient and long-term cost-effective option of LED lighting.

The biggest barriers to making the switch cited by participants include:

This highlights a lack of understanding of the benefits of LED lighting vs. conventional bulbs.

Of the companies that are currently using LED lighting (49 per cent use LEDs in all office areas), 18 per cent of respondents believe they are saving 21-30 per cent since switching from conventional lighting.

Nearly a quarter (24 per cent) of participants who are yet to use LEDs largely underestimate the savings that can be made, thinking that only 6-10 percent can be saved off their current bill. Some expect no savings at all. In fact, they consume 80 per cent less electricity than incandescent bulbs, drastically cutting electricity bills.