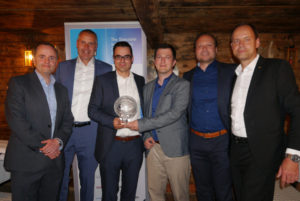 TTI, Inc., a world leading specialist distributor of electronic components, has named this year’s winners in its Supplier Excellence Awards programme, acknowledged across the industry as a rigorously-audited and highly sought-after recognition of quality performance. Throughout the year, TTI measures performance against specific actions – including on-time delivery, administrative quality, operations and business systems and joint customer support – and awards points according to challenging quality performance standards.

KOA was named Best Quality Award winner for the second consecutive year for the highest number of points in each of the quality categories.

Commented Geoff Breed, TTI’s VP Marketing in Europe: “Our Supplier Excellence Awards do more than just acknowledge and reward the consistently high service levels provided by our suppliers. They also help us – together in a partnership – to continuously improve the quality of our customer service programs. We are delighted that our suppliers have the same approach as us and we congratulate them on their exceptional efforts, commitment and achievement.”

About TTI, Inc.
TTI, Inc. a Berkshire Hathaway company, is an authorized, specialty distributor of interconnect, passive and electromechanical (IP&E) components and the distributor of choice for industrial and consumer electronics manufacturers worldwide. Broader and deeper inventory, leading-edge products and custom supply chain solutions have established TTI as the leading specialist in electronic component distribution. Globally, the company maintains two million cubic feet of dedicated warehouse space containing over 850,000 component part numbers. Along with its subsidiaries, Mouser Electronics, Sager Electronics, and Symmetry Electronics, TTI employs over 5,400 employees and is represented in over 100 locations throughout North America, Europe and Asia. For more information about TTI, visit www.ttieurope.com