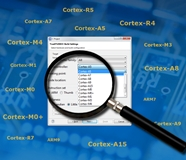 Atollic has announced the next release of their embedded integrated development environment TrueSTUDIO v4.0 providing developers with a comprehensive integrated suite of tools that now adds support for many new ARM-based devices in addition to tool chain improvements.

Also in this release, the support for generic ARM Cortex-A-based series of application processors has been extended from the Cortex-A5 core to include the Cortex-A7, Cortex-A8, Cortex-A9 and Cortex-A15 processor cores. The Cortex-A series of cores are aimed at very high volume and low cost applications that are likely to be using a feature-rich real-time operating system.

Complementing the addition of target core support, a number of specific devices and evaluation boards have also been added to the list of support targets. These include the Infineon XMC1000 family of Cortex-M0 devices and the NXP LPC4xxx family of Cortex-M0/M4 dual core microcontrollers. With the LPC4xxx targets TrueSTUDIO v4.0 can debug both cores simultaneously using only one GUI debugger instance, vastly simplifying dual-core development.

Additional IDE improvements include the upgrading of the Eclipse platform and the GNU compiler tool chain. The compiler now has better code size optimizations in addition to a smaller runtime library. Furthermore, Atollic have now included a new fault analyzer that determines the cause of system crashes and highlights the relevant code that forced the processor into a fault condition. The location of the code that brought the processor into a fault condition is displayed in both the source code editor and disassembler view.

The new product release also includes native support for kernel aware debugging of applications based on the eTaskSync scheduler from HCC Embedded. The TrueSTUDIO debugger now contains debugger views that display the internal state of the eTaskSync task scheduler, simplifying development of such projects.