Increasingly, Systems-on-Chip (SoCs) from smartphones and tablets have been used in automotive applications as IVI systems became more sophisticated, requiring more functionality and greater performance. However, due to differing connectivity standards on devices such as displays, existing SoCs often lack of necessary interfaces required for automotive networks. 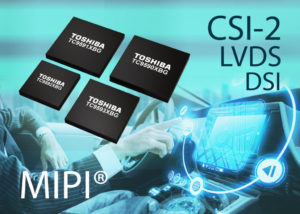 Toshiba has a long history in developing MIPI-based interface bridge chips for consumer applications and have drawn on their experience in this area while developing the new automotive IVI range.

Sample shipments of the new devices start in June 2018.