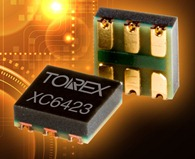 Measuring only 1.2mm x 1.2mm x 0.4mm, the LGA-6A01 is the latest in a long line of ultra small packages from Torex. It utilises a new construction technique, removing the need for traditional bonding wires in favour of direct connection between die and pads which allows for significant improvements in thermal performance resulting in higher power dissipation when compared with traditional packaging techniques.

The LGA-6A01 package construction offers further benefits in that by removing the need for bonding wires between the die and pad it reduces the total resistance between the input and output pins of the LDO by an appreciable amount. As a result the XC6423’s drop-out voltage is typically only 95mV@150mA (VOUT=3.0V) which helps to extend usable battery life in portable electronic devices.

Ultra fast transient response ensures the highest level of output stability and furthermore, each LDO circuit is completely isolated to ensure no unwanted cross-talk between channels during load fluctuations. The XC6423 delivers high PSRR (75dB@1kHz) and low noise operation making it ideal for both RF and Digital applications.

Consuming 90µA per channel, the XC6423 has been optimised for low power applications and each output voltage can be set-up independently within a range of 1.2V to 3.6V, in 0.05V steps with either a ±1% or 20mV tolerance. Both channels can be controlled independently using separate EN pins and in standby mode the current consumption reduces to less than 0.1µA.

The XC6423 is fully compatible with low ESR ceramic capacitors and includes a CL discharge function with a dedicated internal switch to ensure the VOUT pin quickly returns to the VSS level when the LDO is shut-down via the EN pin. The XC6423 can work from inputs ranging from 1.6V to 5.5V.

In addition the XC6423 includes an over current protection circuit that not only stops the IC when the output current is too high, but also permits the IC to automatically resume normal operation as soon as the over-current condition disappears. In-rush current protection is also included to help manage the start-up phase.