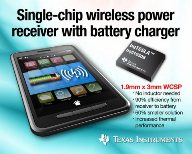 Texas Instruments (TI) has introduced its first single-chip wireless power receiver with integrated battery charger and a new “free-position” transmitter integrated circuit, which expands the charge area by 400 percent. The two bqTESLA circuits have been designed to give smartphone users a simpler charging experience and to help designers implement wireless power technology in more places, such as automotive consoles, charging pads and office furniture.

The bq51050B is, according to TI, the industry’s first Wireless Power Consortium (WPC) 1.1 Qi-compliant wireless power receiver with integrated direct battery charger, and enables faster, more efficient charging of smartphones, wireless keyboards and other portable electronics. The 20-V receiver combines rectification, voltage conditioning, communication control and Li-Ion charging capability in a single, tiny integrated circuit, and by so doing eliminates the need for a separate battery charger circuit. The inductor-free, single-stage design delivers the industry’s highest system efficiency and saves up to 60-percent board space compared to a multi-stage implementation.

In addition to the receiver, TI’s bq500410A is the first WPC 1.1-ready wireless power transfer controller to support A6 transmitters. The controller allows a Qi-compliant smartphone or other portable device to charge in a surface area of at least 70 mm by 20 mm, 400-percent larger compared to today’s 18-mm by 18-mm “bull’s-eye” charge space. The bq500410A achieves greater than 70-percent efficiency, and relies on a unique parasitic metal and foreign object detection feature to safely protect the system and stop delivering power if a metal object is detected between the transmitter and receiver.