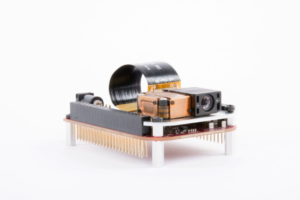 The DLP LightCrafter Display 2000 EVM makes it easy for developers worldwide to design with DLP technology. The EVM’s dual connector is set up to support any flexible GPIO-driven video interface capable of up to 24-bit red/green/blue (RGB)-capable processor, including the BeagleBone Black development board based on TI Sitara AM335x processors, and includes software drivers and BeagleBone Black code examples for easy programming. This makes the technology more accessible for developers to incorporate high-performing DLP Pico displays into new applications.

Key features and benefits of the DLP2000 chipset and EVM

·      Industry’s most affordable pico display solution: Designed with developers in mind, this $99 EVM is a building block to pair with low-cost processors for display applications.

·      Developer-friendly: The new EVM features a standard interface and plug-and-play functionality for quick assessment, allowing signals from the display controller to connect with any 24-bit RGB-capable processor and providing solutions with a high-definition (HD) aspect ratio.