While we may like to think of the modern world as being wireless, cabling remains an important element in almost all electrical systems. It’s therefore essential that engineers know how to test cables effectively to ensure they are fit for purpose. Here, Matt Collins, business development manager at ide Systems, explains what engineers should look for when testing electrical cabling.

It was in the early days of the twentieth century when renowned inventor and electrical engineer Nikola Tesla first conceived of wireless power transmission. Tesla’s idea was to erect a radio tower that could draw electricity from a power plant in Niagara Falls and transmit it wirelessly around the world. He described this as being “the motive power and thought transmitter of the near future”. 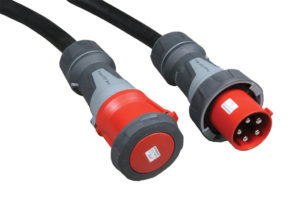 More than a century later, wireless power transmission hasn’t quite lived up to Tesla’s promise. Instead, the increasingly electricity-reliant equipment and systems of today still require the use of cabling to receive power. Yet this is only possible if the cable is in a suitable condition and fit for purpose, as a damaged or compromised cable run is unsafe and ineffective.

It’s therefore essential that engineers understand what to look for when inspecting and testing a cable. As a temporary power distribution specialist, ide Systems’ rental service supplies cabling to everything from music festivals to commercial facilities — which understandably means that some are returned in a poor state of repair.  As such, we go through a three-step process of ensuring that cabling, whether it is single or multi-core, is fit for purpose.

The first and most obvious step is to visually inspect for any signs of damage to the insulation of the cable and the plug and socket connectors. For temporary applications, the most common observable types of damage are slashed, shredded, crushed and cracked connectors.

However, not all types of damage are immediately identifiable. While it is easy to spot a slashed cable, many engineers may observe factors such as dirtiness as little more than an aesthetic problem. In reality, a mud-soaked cable may be indicative of ingress of water in the cable run, which can pose a health and safety risk.

If a cable passes the visual inspection, it must then go through a series of dead tests to be tested for electrical continuity. This test involves de-energising the cable, connecting an electrical tester end to end to determine if a complete circuit can be made.

This is an essential step as it tests the continuity of phases and earthing in the cable and ensures that the internals of the cabling are wired correctly. If a cable fails this test, it cannot be used reliably in a live application and must be removed from service, rewired and then retested. 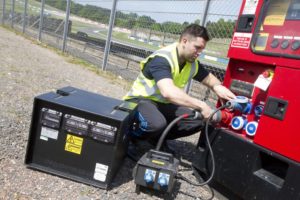 The final stage is to test the cable to ensure it is fit for purpose, which ide Systems does with both Insulation Resistance and a live test.

Conducting an Insulation Resistance test, otherwise known as a megger, is critical in ensuring the cable is fit for purpose. It tests the current leakage through the conductor’s insulation material and, in doing so, tests are compliance to the BS 7671 wiring regulations.

Engineers connect an Insulation Resistance tester to the cable, select the test voltage and are then provided with an electrical reading. A high reading is a pass, as opposed to a low reading which indicates a problem such as water ingress, loose connection or damaged cable.

Even though cabling in outdoor applications should be appropriately IP-rated to protect against water ingress, this can change with use. If an IP-rated cable runs through the mud of a festival for extended periods of time, it may experience some level of ingress.

Once dead tests have been carried out and all test results have been recorded, only then will the engineer safely connect the cable to a known live supply to carry out the live test. The cable is energised and a phase rotation metre is connected to the one end of the cable.

The engineer must then check that the phase rotation metre is displaying the correct sequence of neon lights, which indicates that the test is now correct and complete. Only then can it be marked as “ready for hire”.

While Tesla was correct about a great many things, wireless power transfer has not yet proven itself effective enough to be considered among them. Until that day comes, engineers must ensure that cable runs are fit for purpose and safe for use.