thewindop set to ride the wave of IoT technology

Two kite-surfers, who came together in Scotland and were inspired by a lack of accurate information about the weather at their local beach, are set to crowdfund an autonomous sensing device, which will revolutionise access to real-time conditions in remote locations. 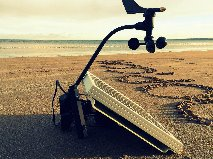 thewindop, winner at Scotland’s first-ever IoTUK Boost event, has designed a product to capture wind speed and other environmental data at inaccessible points of interest, such as beaches and islands. The solar powered device can send data to the cloud from anywhere in the world with mobile phone coverage.

Taking measurements every second, the device provides near real-time information on weather conditions. In addition to wind speed, it has the potential to provide readings for a range of other indicators including air quality and soil moisture content.

Andy Maginnis, co-founder of thewindop, said: “Too often we turned up at the beach only to find the wind was less than forecast or too gusty, meaning we couldn’t ride. What then started as a few chats on the beach and in the pub quickly evolved into a full-scale product.

“The result is the cAno device: a system sized to update data continuously every 15 minutes during a UK winter and send data at various rates, dependent on application. It can also respond to events detected on-board in real-time and users can set alerts through our website for their preferred weather conditions at their local beach.”

Business Gateway Fife helped thewindop fund a mini-production run of 20 cAno devices, with 10 now out in the field. So far they have been deployed at various locations across Scotland, including at the top of the Firth of Cromarty Port Authority, as well as further afield in Scarborough Beach, Western Australia and Brown Island, USA, sending back more than 15.5 million data points to date.

Julian Dale, co-founder of thewindop, commented: “Typically, weather stations are miles inland, the data often consists of a single data point and is lagged by up to 90 minutes. So it was a lottery whether the conditions on the beach were actually stable and safe enough to go out kiting.

“There’s also no Wi-Fi or power at prime locations for wind sports on remote beaches, just mobile coverage – that can make installing devices currently on the market an expensive proposition. The cAno solves both problems by accessing the mobile network and being affordable for groups of people, or even individuals, to purchase.”

thewindop is currently cultivating links with a variety of organisations to fully commercialise the product. cAno has huge potential applications in a number of market sectors, including environmental monitoring, tourism and sports.

The company was recently one of five winners at Scotland’s IoTUK Boost event, organised by Scottish Funding Council-backed CENSIS, The Data Lab, the University of Edinburgh’s Informatics Ventures and IoTUK. It will now undergo one-month of incubation and mentoring, to fast-track the business’s growth and prepare the product for a global launch.

thewindop now also plans to undergo a crowdfunding drive, aimed at raising investment to allow a big increase in the initial network of devices and expansion of the user base.

Andy added: “The potential for this technology is absolutely massive – essentially, we’re talking about instrumenting the environment to the benefit of everyone. There’s a lot of interest from a wide range of leisure sectors – particularly from paragliding enthusiasts, golfers and sailing clubs to name a few.

“Winning at IoTUK Boost is giving us the exposure and validation we needed to make this work, and we’re already seeing the benefits. The valuable feedback and contacts made through IoTUK has provided the stepping-stone to propel the project globally.”

Mark Begbie, Business Development Director at CENSIS, said: “thewindop’s idea was extremely well-engineered, incorporating some real ingenuity and technical excellence. While Andy and Julian were originally driven by a passion to help kite surfers, the idea has potentially huge applications for all sorts of markets – from hillwalkers and sailing clubs, to feeding into crowdsourced metadata for weather forecasting. It just goes to show that what starts out as a small idea can have a big impact.”