The next phase of six-axis robots

The vertically articulated robot series is available in three models, each with varying reach and payload specifications. Compared to previous ranges, the improved TVM six-axis robot series also provides a longer arm length in each of its three models. 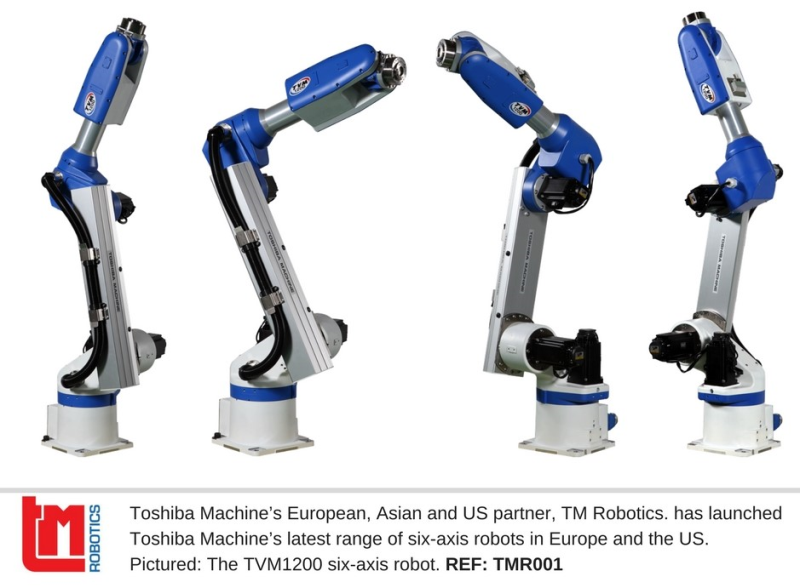 Even though the robot body has been reduced in weight, the six-axis TVM range can still manage impressive payloads of up to 20kg, with the TVM900 model. The smaller models, the TVM1200 and TVM1500 can each manage 15kg and 10kg respectively.

The robots also provide complete hardware compatibility with other Toshiba Machine equipment, including the company’s robot vision recognition package TSVision3D. What’s more, all three models are compatible with the same robot controller, Toshiba Machine’s TSL3200. As with all Toshiba Machine industrial robots, the controllers are programmed in SCOL, a programming language similar to BASIC.

“Everyone is talking about the potential of collaborative robotics in manufacturing. However, investing in this technology is not always feasible, or even necessary,” explained Nigel Smith, founder and CEO of TM Robotics. “By trusting in our expertise, manufacturers can discover whether they really need to invest in collaborative robotics, or whether cell based robots could provide them with a more cost-effective solution.

“Toshiba Machine’s new six-axis TVM range will expand our robotics offering, allowing us to provide cost-effective six-axis automation to manufacturers and industrial applications around the globe. Alongside our Toshiba Machine SCARA and Cartesian robots and the new six-axis TVM range, TM Robotics also delivers training and support services for industrial and commercial applications.”