The alternative to obsolete passives 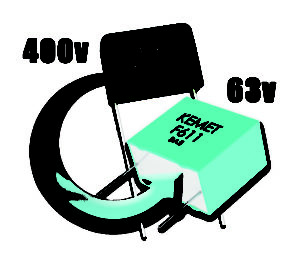 The defence industry is changing. The days of every component being specified to the highest performance and quality levels have been replaced by a more system-specific approach and by the introduction of new technologies.

The change is, perhaps, most evident when alternatives are needed for obsolete capacitors and resistors. This more flexible approach also increases the chance that a distributor can identify a direct alternative, or even an upgraded alternative, if they take the time to ask the right questions.

For many years, the trend in engineering departments throughout the defence sector was to use the highest electrical and quality specifications for every component. Quality and reliability were paramount and, for passive components, that meant specifying the most robust packages and the highest performance parameters across the board. Now, the increased emphasis on using Commercial-Off-The-Shelf (COTS) products for non-critical systems is reducing demand for the highest specification devices. This not only means that many high-spec parts are being made obsolete, it is also changing the way in which replacement devices are being identified.

The easiest scenario for replacing an obsolete passive component is when the alternative can be sourced simply by relaxing the specification. Does the system really need a part with a one per cent tolerance or has it simply been specified at the tightest tolerance when this was considered standard practice? Could it be replaced by a device with five per cent tolerance and still meet the real-world performance criteria? If the original device was specified in a metal case can it this be replaced by a plastic-cased alternative, possibly with the addition of an epoxy end-fill to enhance reliability?

The distributor needs to ask the same questions for the capacitance, temperature, voltage, and stability in order to find the real-world criteria in each application.

A more difficult scenario is when the technology has been made obsolete. An example of this is the polycarbonate capacitors which were effectively made obsolete when the dielectric film was withdrawn around ten years ago. Although a limited range polycarbonate is now being manufactured again it can be useful to consider other dielectrics when replacing legacy devices. The choice of the substitute dielectric will depend on the reason why polycarbonate was specified in the original design. Bearing in mind that these devices tended to be over-specified, identifying the capabilities which are important to each application provides the flexibility to identify the best alternative.

To match the need for high voltage, a polycarbonate could be replaced with a silver mica capacitor which can achieve a voltage of up to 1kV. A circuit which is sensitive to noise, however, would use a silver mica or ceramic if the capacitance value in under 22nF or, for higher capacitance values, a polypropylene film capacitor. For high-temperature applications the first consideration when replacing a metal-cased polycarbonate capacitor would be a ceramic device which can handle temperatures up to 125°C. 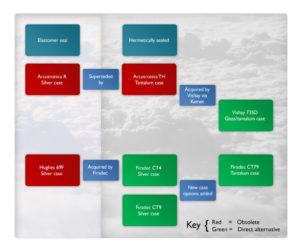 Sometimes an alternative can improve on the performance of the original device.  Advances in wet tantalum capacitors, for example, mean that manufacturers have gradually made older technology versions obsolete whilst continuing to manufacture improved alternatives. The original silver case and elastomer seals which were featured in earlier parts were replaced by silver hermetic cases and then by an all-tantalum hermetic seal. The latest developments also mean that polymer capacitors are becoming a viable alternative to tantalum devices, particularly in applications where minimising PCB size is important.

There are also sound commercial reasons for replacing these older devices with new alternatives because the modern devices are manufactured in higher volumes and often provide a lower unit cost.

Perhaps the most important factor in identifying alternatives for obsolete passives is dialogue between the distributor and engineer. For their part, the distributor must know which questions to ask and use every bit of product knowledge and industry expertise to identify the alternative which is right for each application.