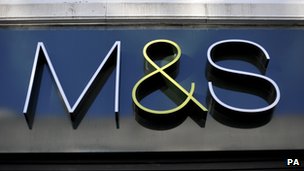 High Street retailer Marks and Spencer has reported a fall in sales of non-food items in the first half of the year.

Like-for-like sales in non-food items were down 1.5% compared with the same period last year, despite the launch of its autumn/winter ranges in September.

M&S said it remained cautious for the rest of 2014.

Chief executive at M&S Marc Bolland said the company continued to invest in the ‘long-term transformation’ of the business.

He said: ‘We are pleased with the progress made, given the high level of activity and a number of key projects launching this year.

‘This has led to a higher level of additional costs, which while planned for, have impacted short-term results.’

The 129-year-old company said although consumer confidence was ‘improving’, it had yet to translate to the High Street.

M&S’s new autumn/winter range was led by an advertising campaign featuring some of Britain’s most high-profile female celebrities, including Tracey Emin and Dame Helen Mirren.