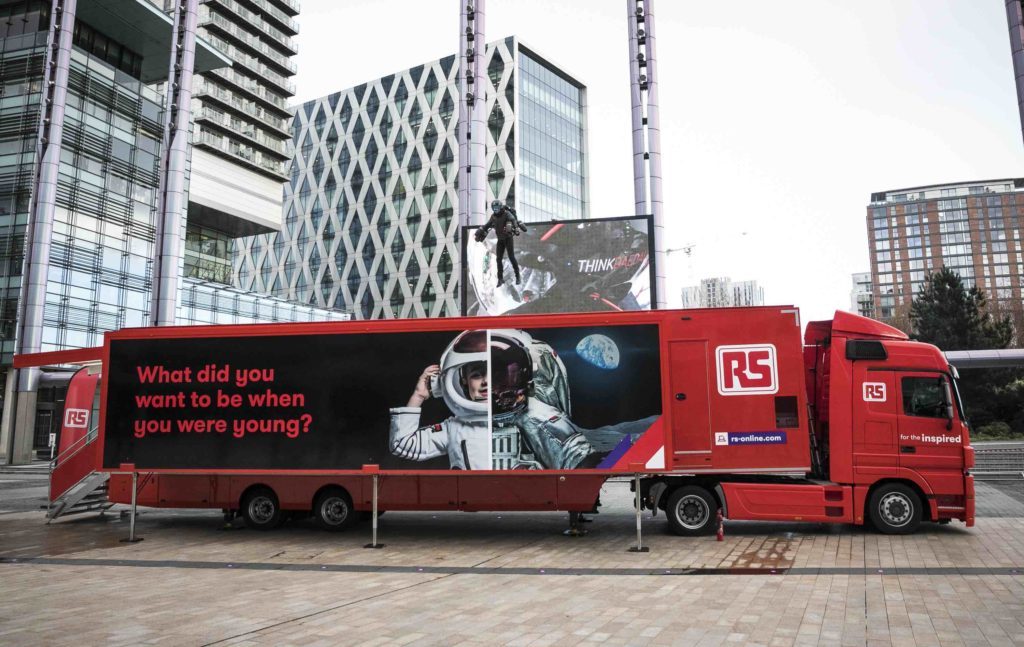 RS Components (RS), the trading brand of Electrocomponents plc, the global distributor for engineers, has launched a new version of its mobile interactive technology truck, Titan 2, as part of its for the inspired campaign. Gravity Industries founder and the first world speed record setter for “flying a body-controlled jet engine power suit”, Richard Browning, is set to ‘fly’ in his human flightsuit, ‘Daedalus’, at the launch event being held at MediaCityUK in Salford, Manchester.

Titan 2 replaces the Titan 1 truck, signifying RS’ continued commitment to bringing the latest innovations to its wide base of customers, whilst educating and inspiring the next generation of engineers through visiting schools, colleges and universities. These objectives support the company’s for the inspired campaign that kicks off with the truck’s UK and Ireland tour. The new 35-tonne truck continues to offer the themes of Titan 1, showcasing technologies such as Raspberry Pi, 3D printing, robotics, the Internet of Things and thermal imaging, but is now packed with even more of the latest technology including demonstrations of virtual reality (VR) and augmented reality (AR) to really bring innovation to life.

Richard supports the work RS is doing in the education and STEM area, and will be on hand at the launch event to share his experience of founding tech start-up Gravity, which plans to successfully complete the world’s first human propulsion flight in the near future.

The DesignSpark Mechanical 3D modelling software tool from RS was used in the development of the ‘Daedalus’ jet-engine flight suit. The Daedalus design team, which included experienced CAD operators, used complex 3D design software to create the initial CAD renditions for the first suit prototype. However, Browning wanted to make changes to the design and shape 3D models himself. This would have meant at least one week of intensive training on the CAD tools, which was simply not possible given Browning’s busy schedule and the timescales for the project. The answer was the free-to-download DesignSpark Mechanical 3D design software from RS, which uses direct modelling technology rather than the parametric methods used by traditional CAD software.

James Howarth, director of Product Management for RS in Northern Europe, said: “Our first truck was a great success, visiting more than 100 customer sites and welcoming over 7,000 customers on board. We also had over 1,000 students experience the truck, who interacted with technologies supporting the STEM curriculum. With the new technologies available on Titan 2, such as AR and VR, we are fulfilling our commitment to keeping our finger on the pulse of the latest technology used in industry today. 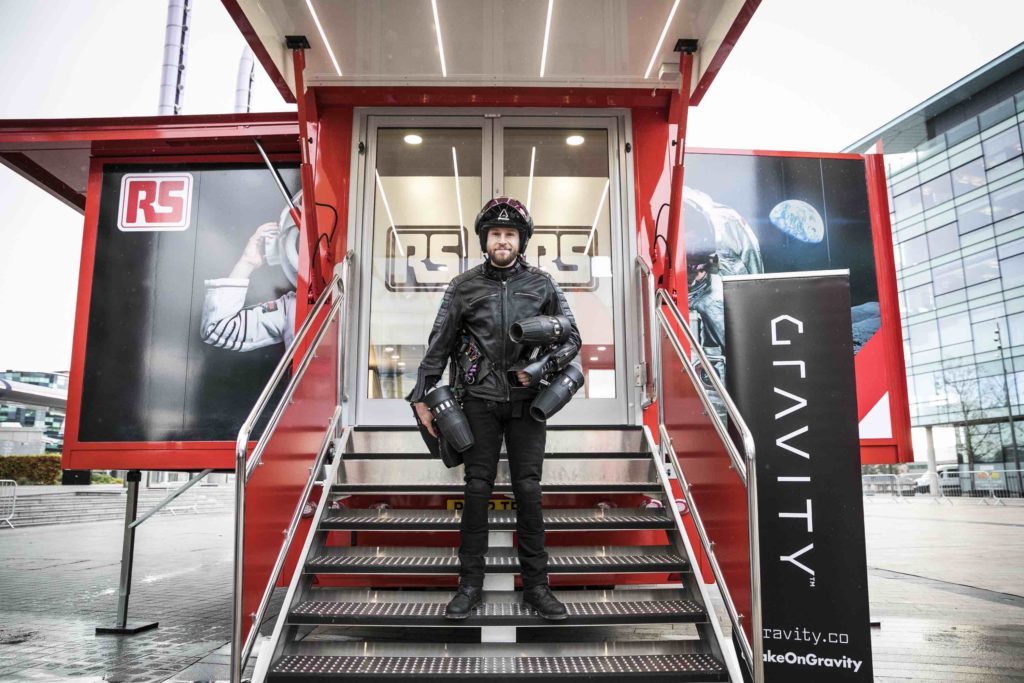 “We need to aggressively address the lack of STEM subjects uptake if we’re to keep the UK engineering industry thriving, and pioneering ambitious technologies. Richard’s presence at our launch event, showcasing his ground-breaking technology, illustrates perfectly why inspiring tomorrow’s engineers is crucial.”

Richard added: “I love the sentiment behind the launch of the ‘for the inspired’ campaign, and I’m proud to be a part of these efforts by RS. We want to not only demonstrate how technology is one of the coolest and most exciting areas to work in, but also challenge some stereotypes associated with engineering as a career choice. The Titan 2 truck, and the Gravity Jet Suit that I will be showcasing, are initiatives that, we expect, should play a crucial part in engaging young boys and girls through technology that will excite and amaze them.”

Whilst the new truck has a similar external footprint to its predecessor, at 21 metres long by six metres wide when fully deployed, the clever new design means more space has been created internally, allowing for more interactive displays. The truck also comes complete with a training room, kitchen area and central heating system and can be fully deployed in just 45 minutes.

Titan 2 will be touring the UK and Ireland throughout the rest of 2017 and 2018, visiting customers and educational establishments. RS will also be supporting exhibitions and events, taking Titan 2 to the Bett education show in January 2018 at the Excel, London.