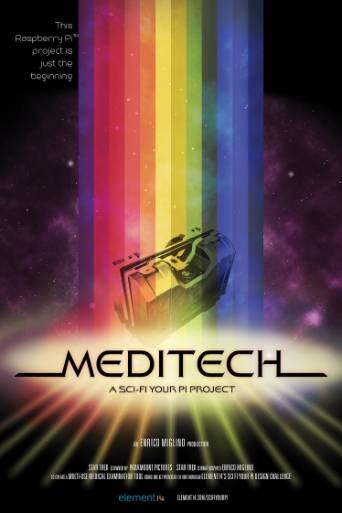 A Star Trek-inspired medical examination kit has been identified as the winner in element14’s “Sci Fi Your Pi” design competition, sponsored by Pi Trading. The competition invited 25 individuals from around the world to create devices inspired by their favorite science fiction films, television shows and books using the Raspberry Pi 2 Model B+ from element14.

The winning design, “Meditech,” (Pictured right) created by element14 member Enrico Miglino of Spain, features a multimeter and the Pi 2, which together measure a variety of biometric signals. Inspired by the Star Trek series, Meditech is a portable multi-tool examination kit measuring heart rate, body temperature, blood pressure and blood glucose. It can also assess eye health and do body surface image analysis. Enrico plans to take Meditech into production and is currently working on pre-production of the first 10 units.

Three other finalists were identified as part of the challenge. Michael Hahn (U.S.) also drew inspiration from Star Trek to build a scientific tricorder that can evaluate the environment’s atmospheric conditions, temperature and humidity. Finalist Joey Thompson (U.S.) built a QuadCop, a low-cost, custom-built quadcopter that performs security screenings, inspired by the Terminator series. Frederick Vandenbosch (Belgium), created a PiDesk, which leverages the Raspberry Pi 2 Model B+ to turn an ordinary work desk into an interactive series of touch and motion controls, similar to the one featured in the Tron Legacy franchise.

The Sci Fi Your Pi challenge is the latest in a series of competitions as part of element14’s “Engineering a Connected World” initiative, which is designed to drive innovation by connecting engineers to powerful new ideas, the latest technologies and to each other.

“element14 congratulates Enrico and all of the other finalists who took part in and successfully completed the Sci Fi Your Pi challenge,” said Dianne Kibbey, Global Head of Community, element14. “The response to this competition was incredible, and we’ve thoroughly enjoyed watching our participants mix creativity and engineering to bring the power of the Raspberry Pi 2 to life.”

Enrico’s project won the top prize – $500 worth of sci-fi movie memorabilia, including an actual Boba Fett bounty hunter helmet used in film production. Meditech was chosen by a panel of expert judges, including Director of Hardware Engineering James Adams of Pi Trading.

“For decades, science fiction films, television shows and literature have inspired fans all over the world to bring their most ambitious project ideas to life, and the Raspberry Pi is not much different,” Adams said. “Pi Trading was delighted to partner with element14 for the Sci Fi Your Pi challenge, and we thoroughly enjoyed following all of the competitors on their journey from ideation to completion.”

Competitors were judged on the innovativeness of their designs, as well as the level of inspiration drawn from the world of science fiction. To aid in their designs, each competitor received a full suite of Raspberry Pi accessories from element14, including the PiFace Control & Display, Raspberry Pi B+ and Raspberry Pi A+ boards and PiFace Digital. Competitors were also given a free license for CadSoft Eagle, the market-leading PCB design software, to execute their projects.