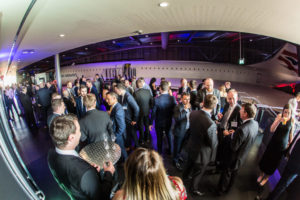 Stars of the South West aerospace and defence sector were celebrated on 27 June 2018 at the second WEAF Aerospace Ambassadors Awards under the wings of Concorde at Aerospace Bristol.

Organised by the West of England Aerospace Forum (WEAF), the annual awards focus on the cream of the industry and shine a spotlight on their outstanding achievements.

Backed by headline sponsors Safran and SKF Aerospace, the awards attracted scores of entries, which presented the judging panel of independent and recognised experts a very pleasant problem – how to choose the best from the best!

The South West has one of the largest concentrations of aerospace and defence capabilities in Europe, and is the largest aerospace cluster in the UK, worth more than £7bn per annum. 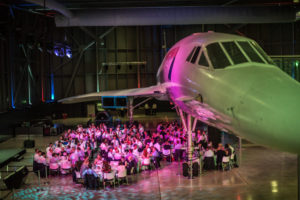 Ben Smith said: “It has been great to work for a company which has given me an enjoyable and absorbing career. I’m extremely proud to have received this award for my work in this field. I’d also like to thank my great colleagues at Rolls-Royce who have supported me and who have also contributed to the design and success of our cutting-edge technology products.”

Nick Epps said: “Thank you so much. I feel so honoured to receive this award. I am privileged to be working with a team of people so passionate about the growth and development of Bowmill. I’d like to thank all of Bowmill’s colleagues and clients who have supported not just me, but the business itself.”

Liam Towills said: “I am pleased, honoured and humbled to accept this award. It comes at a crucial time in my career and I am very grateful. RPI UK has given me the opportunity to develop professionally to a level that has only been possible thanks to the continuous mentoring and support I received from the managers, supervisors, and peers that has made my experience a memorable one.”

Frank Bamford said: “It’s an absolute honour to receive this accolade from the West of England Aerospace Forum. I am humbled and proud to see the impact I have made on the Aerospace and Defence industries and would like to thank the companies and teams I have worked with over the years. I look forward to seeing British Aerospace Manufacturing go from strength to strength in the future.”

Paolo Zanotto said: “I am obviously delighted to win this award – I feel very proud to be recognised as an ambassador for the aerospace industry, which is something I appreciate greatly. It is a privilege to work with such an inspiring and skilled team at Leonardo, without which I could have never dreamt of such as achievement. It’s very rewarding to rapidly deliver such a positive impact on our customer’s operation. My thanks again to all those involved, and to my wider team who have enabled me to receive this accolade.”

Linda Coode said: “All of us here at Aerospace Bristol are thrilled to see our Concorde Video recognised in the Aerospace Industry. The video was and is a labour of love from all of us involved. Meeting so many people who worked and flew on the aircraft itself was utterly inspiring and humbling, they retold their tale to us and in return we tried to create a film to help commemorate the aircraft. I hope that we have done everyone justice in this.”

Jane Egginton, daughter of Trevor Egginton said: “Trevor was incredibly passionate about pushing technology to the next level throughout his career and the fact that this has been recognised by his peers in industry today makes me incredibly proud of his achievements. This award will be cherished by myself and Trevor’s family for many years to come.”

Adrian Harding, business development manager of WEAF, the leading membership trade organisation for aerospace and defence companies in the South West, said: “Congratulations to all the winners of the second Aerospace Ambassador Awards – the brightest and best in the South West’s aerospace and defence sectors! And a well done to all the individuals who were shortlisted – the judges had an extremely difficult job, such was the quality of nominations. The South West is a nest of innovation in engineering and manufacturing, and the individuals who have won these awards demonstrate this perfectly.”