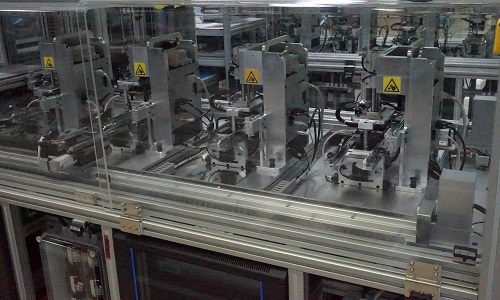 The Pencoed-based business will be increasing its production rate from 18,000 units to 80,000 units per week to cope with the expected level of demand of the next-generation Raspberry Pi 2, which has been launched world-wide today.

The new Raspberry Pi 2 Model B has significantly upgraded capabilities, with faster processor cores and double the amount of memory capacity (1GB).  The product’s new processor makes it more than six times more powerful than the first generation Raspberry Pi Model B+.  This increased capability will enable Pi enthusiasts to create more powerful applications that will run faster, be more reliable and more robust.

Since Sony UKTEC began working with the Raspberry Pi Foundation in August 2012, the site has manufactured in excess of 3.5 million Pi’s and created thus far 70 jobs.  However, with demand for the latest model growing exponentially the site forcasts an additional 30 staff will be added to its workforce.

The site has also worked with the not-for-profit organisation to design and develop suitable manufacturing processes and techniques, so that the Pi products can be built as efficiently as possible without compromising on quality.

Eben Upton, co-founder of the Raspberry Pi said; “Sony UKTEC have worked closely with Raspberry Pi to deliver the new Raspberry Pi 2 Model B.  Sony UKTEC’s expertise in rapid prototyping and production engineering has allowed us to proceed from first prototypes to full mass production over a period of less than four months, with an unprecedented level of confidence in product quality and delivery schedules. This is our sixth project with Sony UKTEC since 2012, and we look forward to working with The company through 2015 and beyond to bring more exciting Raspberry Pi products to market.”

To fulfil the projected order requirements Sony UKTEC has made significant investment to its manufacturing equipment and techniques with the inclusion of automated product testing and automated packing.  This will provide the site with greater flexibility and scalability should demand increase further,

The additional equipment will also ensure that its main area of business – the manufacture of broadcast and professional camera systems – is unaffected.

Steve Dalton OBE, managing director of Sony UK Technology Centre, stated; “The success of the credit-card-sized mini-computer has taken the world by storm since it was launched in 2012.

“The Raspberry Pi, is a fantastic example of UK innovation, design and engineering, at its best.  From the day the product launched we knew the Raspberry Pi would be a success and we wanted to be part of it.  With new developments to the product continuing to evolve we have risen to the challenge to meet the level of demand across the world for this product. We’re excited to be manufacturing the latest Raspberry Pi model and we look forward to continuing to work with the Foundation and distributors Premier Farnell and RS Components.”

The Raspberry Pi has been developed by non-profit Raspberry Pi Foundation, is a credit-card sized computer, designed to stimulate young people’s interest in computer programming and electronics.