ROHM, together with Kyoto-based Aquafairy Corp. and Kyoto University, have co-developed compact, lightweight, high-power hydrogen fuel cells designed to power smartphones and other portable devices. These fuel cells overcome the drawbacks of dry cells, lithium-ion cells, and direct methanol fuel cells, significantly reducing weight and increasing output power while providing a higher level of safety, making it possible to provide power in places where AC power is not available or cannot be used.

Fuel cells can be made smaller, lighter, and more efficient than conventional storage and rechargeable cells, and thus are expected to drive expansion into new markets and applications. In fact, there is already extensive use of fuel cells using methanol and hydrogen. However, methanol fuel cells have several disadvantages that prevent widespread acceptance. Unlike hydrogen fuel cells, it is difficult to increase power output. And hydrogen fuel cells require the use of cylinders, making them harder to handle and hinder efforts towards greater miniaturization. 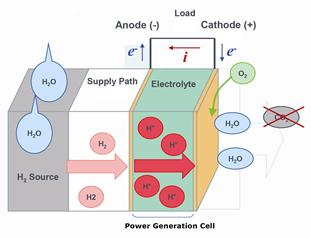 ROHM, together with Aquafairy, has recently succeeded in solidifying calcium hydride in a sheet configuration using proprietary technologies, generating approximately 4.5 liters of hydrogen from a sheet less than 3cc in volume (measuring 38 x 38 x 2mm), providing a power output of 5Whr. The hydrogen fuel cells are compact and can operate at ambient temperatures, making them suitable for use in smartphone chargers, tablet PCs, as power sources outdoors and in remote areas, and in emergency backup power supplies. In addition, they emit no carbon dioxide or hazardous gases and can be disposed of as general waste.

ROHM, Aquafairy, and Kyoto University will continue to work on assessing reliability and making further improvements, with production targeted for April 2013. The fuel cells will be displayed at Electronica (Munich, November 2012).

In addition to expanding its lineup of hydrogen fuel cells for smartphone chargers, ROHM and Aquafairy, in collaboration with Kinkei System Corp., are also developing fuel cells for powering seismometers in remote areas that prevent the use of traditional power supplies. Compared with conventional lead batteries, the cells reduce weight by 1/4 with same capacity, making it possible to provide 400Whr from a device that weighs only 3kg.