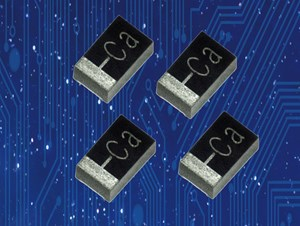 The new F98-AS1 Series capacitors feature a proprietary lead-frame-less structure with precise dimensions and low stress packaging, an internal thin film fuse that protects against short circuits, and well-established undertab termination technology, which enables high volumetric efficiency and high PCB assembly density. Currently available in a 0805 (2012 metric) S case with four ratings (22F/10V, 33F/10V, 10F/16V, and 1F/35V) and a 0.9mm maximum height, the F98-AS1 Series is the smallest and thinnest SMD fused tantalum product currently available on the market. As such, the series is ideal for use in a wide variety of applications in which safety and size are a primary concern, including: automotive, commercial, industrial, and medical applications, and the input/output lines of small power supply circuits, portable gaming devices, and smartphones.

The new F98-AS1 Series fused undertab tantalum capacitors provide fail-safe high CV performance in a broad range of applications for which safety and size are primary concerns, said Tomas Zednicek, technical marketing manager at AVX. Samples of the series received an enthusiastic reception from customers and, thanks to their input, several series extensions, including a higher capacitance 0805 part and numerous 0603 parts, are already in development.

The F98-AS1 Series capacitors are rated at 85°C and are designed for use in temperatures spanning -55°C to +125°C. The series is also lead-free compatible and RoHS compliant.