Simpler, thanks to reduced complexity 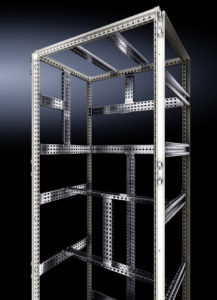 Less is more; that is the philosophy behind Rittal’s new VX25 large enclosure system. The new range has helped to reduce complexity in enclosure systems significantly thanks to a consistent 25 mm pitch pattern and complete symmetry. The number of common parts has also been significantly increased, which means fewer components and therefore far less storage space.

Rittal is launching a new chapter in enclosure technology, with the development of a consistent 25-mm pitch pattern and full symmetry.  Because the new frame section in the 25 mm grid is now also used in the horizontal part of the frame, the enclosure can be expanded much more flexibly, even beyond its limits.

Installation components for the vertical frame parts now fit into the enclosure’s roof section and base area. When the enclosures are bayed, the 25-mm pitch pattern then continues through into the adjacent enclosures. As a result, rails can be mounted over multiple enclosures. These and other baying options can now be installed with a 40 per cent reduction in the range of punched sections, with or without mounting flanges. This means inventories and logistics outlay can also be substantially reduced. 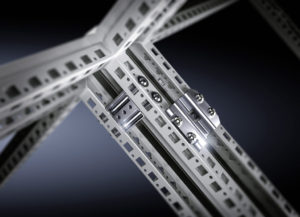 At the same time, the new frame section in 20-mm installation depth provides more space in the enclosure; space which is now made available for the installation of components. Depending on the application involved and the components used, smaller switchgear can be used, which translates into lower costs.

A significant reduction in complexity also impacts the assembly and disassembly of the doors. This work can now be done by one person, without the need for any tools whatsoever; the door is simply hung in the hinge. The hinge is designed so that the door is automatically secured when closed, so that unnecessary lifting is avoided.

All common variants will be available for use in the locking system. Electronic locking systems, which are increasingly being used in response to increased safety demands, can be easily retrofitted. Here too, there is no requirement for subsequent machining of the door because the bushings needed for the cables are already included. 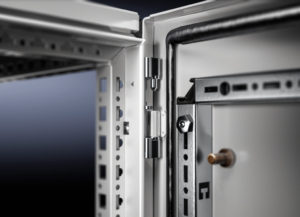 A number of innovations have also been implemented when it comes down to joining up enclosures in bayed suites. The new baying system needs far fewer parts. Because all the screws are mounted in the direction of the bay, assembly is also far simpler.

A new baying seal, which is simply snapped on, ensures that the enclosure’s degree of protection is retained when baying.