To help developers simplify the design of mesh-networked devices for the Internet of Things (IoT) and get to market faster, Silicon Labs introduced a comprehensive suite of software and hardware that supports the new Bluetooth mesh specification. The new Bluetooth mesh solution benefits from the company’s proven mesh networking expertise and includes development tools, a software stack, and mobile apps supporting Silicon Labs’ wireless system-on-chip (SoC) devices and certified modules. The combination of Silicon Labs’ patented network analysis tools and Bluetooth mesh stack for smartphones enables IoT developers to cut time to market by up to six months when compared to existing wireless development tools and techniques.

Bluetooth mesh devices are ideal for smart home, lighting, beaconing and asset tracking applications. A mesh network enables devices, such as connected lights, to be deployed at greater distances from a hub or gateway. As each light is deployed, the communication range increases, allowing a single gateway to cover an area larger than one that is simply covered by a star network topology. In retail marketing and asset tracking applications, Bluetooth mesh technology simplifies the deployment and management of beacons. By combining Bluetooth Low Energy (LE) with mesh networking, new capabilities and value can be introduced into devices such as connected lights which can also serve as beacons or beacon scanners. 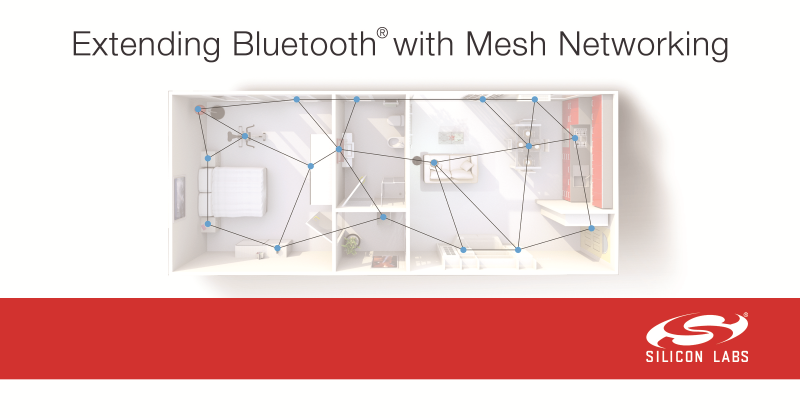 “Bluetooth is the next frontier in mesh networking, and Silicon Labs’ new Bluetooth mesh software and tools keep us at the forefront of this rapidly emerging ‘many-to-many’ network topology,” said Richard Baxter, president and CEO of Mesh Systems, an IoT software, services and solution provider. “From easy-to-use development kits to mobile applications that help us connect devices seamlessly, we rely on Silicon Labs’ deep expertise in mesh technology to give us the hardware and software resources we need to increase productivity and speed development time so our customers can better compete in today’s IoT race.”

“We expect to see a wave of new devices hit the market quickly by leveraging ubiquitous Bluetooth connectivity to create hub-less mesh networks that extend the range and reliability of Bluetooth systems,” said Daniel Cooley, senior vice president and general manager of IoT products at Silicon Labs. “No matter which mesh technology developers choose to power their next IoT designs, we offer a complete portfolio of silicon, software and solutions that gives device makers everything they need to accelerate time to market while designing secure, robust mesh networks.”