IoT specialist SensiEDGE has announced the release of SensiBLEduino, a new off-the-shelf, ‘hardware-ready’ development kit based around Arduino, the popular open-source electronic prototyping platform. Developers can now combine the Arduino programming language and Arduino Software (IDE) with the SensiBLE development kit SIMBA-DKL and STM32duino ‘Function Pack’, to design a proof of concept with continuity through to final product. Most importantly of all, this can be done at industry-leading speeds, radically cutting development costs and reducing time to market. As a result of this ground-breaking launch, IoT application developers need look nowhere else for their preferred proof of concept system. 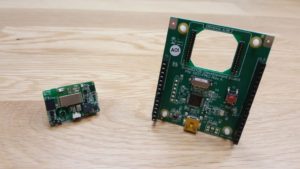 The numbers speak for themselves: over 5000 customers have already made the SensiBLE cloud module or SensiBLEduino development kit their ‘System on Module’ (SoM) of choice inside thousands of projects worldwide, many of which have gone on to achieve considerable commercial success. A global community of makers, including hobbyists, programmers, artists, professionals and students, has flocked to this open-source solution, all looking to leverage benefits such as ease-of-use, speed and compact size.

SensiBLEduino can boost any IoT project thanks to its tiny form factor that delivers out-of-the-box cloud connectivity. The module is supported by the Arduino language and Arduino Software (IDE); Arduino is known to simplify the process of working with microcontrollers, providing a solution that is both inexpensive and open source.

SensiBLEduino is pre-programmed with Demo firmware to visualise the data performance of sensors using the ST BLUEMS App and cloud services such as IBM Watson, Microsoft Azure and Amazon AWS, as well as any generic MQTT protocol, thus giving the ability to connect to any cloud.

“This is a major step for SensiEDGE,” said Milan Yudkovich, the company’s founder and managing director. “Now, anyone with an idea can build a prototype at unprecedented speed, slashing development costs and reducing time to market. We see huge potential for the SensiBLEduino module.”