Latest sales figures released by the manufacturer authorised distributor (afdec) group within the Electronic Components Supply Network (ecsn) reveal that a slowdown in semiconductor sales prompted a ‘flat’ overall total monthly Billings (Net Sales Invoiced less Credits) result in December ’17 compared to the same month 2016, and an overall (seven per cent) decline when compared to November ’17. Changes within the association’s product reporting groups in December (compared to the same month 2016) show that: “Semiconductors” declined by (five per cent), whilst “Passives” increased by 12 per cent, “Electro-mechs increased by six per cent, “Component Assemblies” increased by three per cent and “Other Products” increased by six per cent. 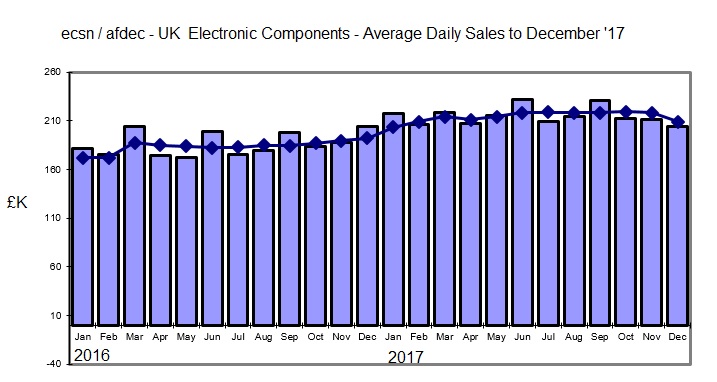 According to ecsn chairman, Adam Fletcher, overall Bookings in December ’17 also showed a (seven per cent) decline when compared to the previous month but grew by 10 per cent compared to the same month 2016: “The Sales by Month ‘three month moving average’ for all electronic components suggests that growth will slow down during Q1 ‘18, which is in marked contrast to the Q’1 historical trend,” Fletcher said. “The Book-to-Bill ratio in December ‘17 remained ‘flat’ at 1.11:1 but the polynomial trend line suggests that a positive B2B ratio into Q1‘18 is likely.”

The latest Markit/CIPS UK Purchasing Manufacturing Index (PMI), ended the year with a two-point decline after remaining positive for 17 consecutive months, a result widely greeted as a ‘very solid’ end of year performance. Strong growth in orders for export markets in Europe, USA, China and Middle East for intermediate and investment goods seem set to continue but consumer goods sales remain weak. Rises in the price of input goods are slowing at a time when uncertainty of supply and competition continues to drive electronics prices up, although this commercial advantage has been offset somewhat by higher selling prices for finished goods: “Global GDP is forecast to grow at three per cent as markets progress into 2018 but global electronic components markets are forecast to grow at twice that rate, so Authorised Distributors will continue to find themselves challenged to meet the needs of players throughout the supply network,” added Fletcher. “ecsn afdec members will continue to invest carefully in inventory in-line with customer demand and extending manufacturer lead-times to support their customers and provide a vital link in balancing the supply and demand needs in the UK electronic components market.”