Until recently, high entry level prices often discouraged the use of industrial SSDs, but thanks to ongoing price optimization they are now becoming more and more popular as storage media. There are several key factors to take into consideration when deciding on the purchase of SSD storage media, however, varying storage applications will dictate the use of different memory solutions.
In the last few years it has become ever more common to use solid state drives (SSDs) rather than traditional hard drives (hard disk drives, HDDs) in a growing range of applications. They supersede traditional storage media in many respects – predominantly in an industrial market.

In particular small SSD form factors such as CompactFlash or SD cards have already proven themselves in industrial environments for many years. There are several key factors to take into consideration when deciding on the purchase of SSD storage media, however, varying storage applications will dictate the use of different memory solutions.

In general SSDs are made from the following key components: a printed circuit board, a controller, firmware, memory (usually based on NAND flash technology) and optional cache.  With NAND flash memory devices, individual storage cells pass into different states, thus storing information.

As this is done purely electronically the access times of SSDs onto the entire memory area are much faster.  SSDs are seeing even more interest in ruggedized industrial applications since they work without moving parts.

In comparison to HDDs they are less noisy, more reliable, energy efficient, and shock and vibration proof.  Add to this a longer operational life span of nearly ten years as compared to only a few years with HDDs and your only disadvantage today is their increased price per density, which is continually decreasing.

Lowering the costs comes at a price, however.  It compromises the life time, reliability, speed, and endurance.  MLC memory therefore comes with a much higher failure rate, thus requiring much more extensive and elaborate error correction methodology.

An MLC’s program erase cycles are also limited.  Suppliers usually indicate 100,000 cycles for most SLC flash memories, but only 1,000 to 3,000 cycles for MLC.  There are also significant differences in endurance.  SLC solutions reliably store data for up to ten years, whereas MLC solutions only store data for a maximum of one year.  This clearly does not suffice for data logging or read only applications as in boot media with static data for operating systems, for example.

These differences are technological.  Take the following simplified example for clarification.  A glass of water that can only be either full or empty simply and clearly shows its current state – just like an SLC storage cell that can be either 0 or 1.  With four different fill levels like in MLCs, however, it is more difficult to assess whether the glass is filled to 0%, 33%, 66% or 100%. This is even more difficult with TLC components with eight possible states (see image 1).

SLC storage, such as products from Swissbit AG, are preferable for industrial applications
As MLC and TLC memories are less expensive than SLC they are ideal for consumer goods such as MP3 players, cameras, USB sticks, or cell phones. Here prices play a more important role in sales, there are not as many read and write operations, and reliability or endurance are not as relevant as in industrial applications. 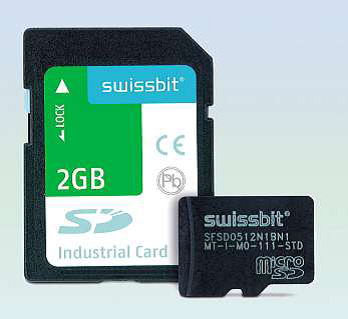 Industrial applications, however, almost always benefit the most by using SLC memories.  Larger SSD memory solutions, with a size of 2.5” like traditional disk drives, are generally equipped with high-performance controllers and not only have SLC or MLC Flash devices but also an additional DRAM (dynamic random – access memory) component.  This greatly improves the reliability and life expectancy of the SSD.  In smaller SSD memory solutions – as required for automation or embedded applications – this combination is impossible due to the limited space available and the required power fail safety.  This is why in CompactFlash, C-Fast, SD, or microSD cards you predominantly find only flash technology being used. There is no way to avoid SLC solutions, as this Flash cell technology provides the highest reliability with a low error rate and long endurance.  In industrial computers, for example, that often run 24/7 with system up-time being the highest priority, the additional price of only a few Dollars for an SLC solution quickly pays as system downtime usually comes at a much higher cost.  Then there is another upside: SLC solutions allow 20 to 100 times as many write cycles as MLC solutions and provide data preservation for ten years.

Irrespective of the choice between SLC, MLC or TCL SSDs, memory products of different manufacturers show significant differences in fulfilling the industrial requirements.  One of the important aspects is long-term availability.  System providers often list their products in their portfolios for several years.  A required requalification due to changed memory components doesn’t add new functionality, but binds necessary resources and slows down the development of next generation systems.
Even if the same components are used, users still face problems.  Where one memory card works perfectly in a given application, a card of a new delivery with the same marking often fails in that application.  This is due to the BOM (“bill of material”), which describes the components and firmware used in the memory card. Unfortunately manufacturers frequently use different components, thus changing the BOM, without labeling this or notifying the customer.  If new firmware or a new Flash die revision is used, the affected card might fail completely due to incompatibility or function improperly.  This is why Swissbit introduced a “fixed bill of material” for their memory solutions; all products for this reason are structurally identical with the sample and therefore 100% identical between themselves in all deliveries. The part number furthermore gives detail about the type of firmware, controller or Flash devices used in the respective card.  Should changes be required, the part number is modified as well and customers are promptly notified by a “product change notification” (PCN).  They can then check whether their components are compatible before using these modified storage solutions.

Irrespective of the choice between SLC, MLC or TCL SSDs, memory products of different manufacturers show significant differences in fulfilling the industrial requirements.  One of the important aspects is long-term availability.  System providers often list their products in their portfolios for several years.  A required requalification due to changed memory components doesn’t add new functionality, but binds necessary resources and slows down the development of next generation systems.