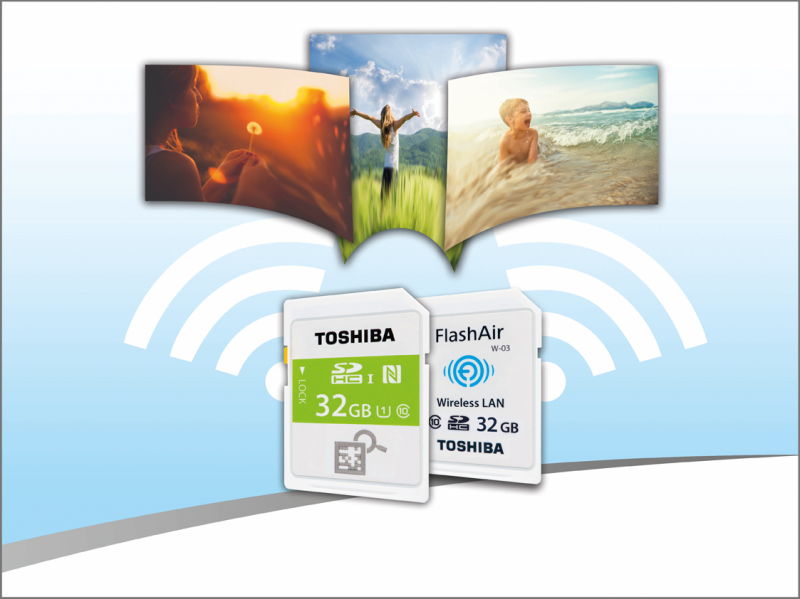 With Toshiba’s NFC SDHC card users can preview card content and spare capacity with just the touch of a smartphone, while FlashAir III cards can serve as their own wireless LAN access point. This allows users to share files wirelessly – even when out of range of a wireless hotspot or a mobile phone signal. Shipments of the cards to the European retail channel will begin in March 2015.

To find out what is stored on an SD memory card it usually needs to be inserted into a PC, laptop or digital camera. However, Toshiba NFC SDHC cards enable data to be previewed by NFC-enabled Android smartphones with just a touch.

Both of the new cards use apps to manage card communication. For the NFC SDHC card the Toshiba “Memory Card Preview” app allows users to preview available storage space, as well as 16 thumbnails (max.) of the photos stored on the card. The FlashAir mobile app (available for iOS and Android) makes it easy to share files and manage the device from smartphones and tablets. Improved Photoshare functionality enables users to quickly designate which photos to share with friends and family and which photos to keep hidden.

The UHS-I, SD Class 10 NFC cards are available in capacities of 8GB, 16GB and 32GB. The NFC chip is compliant with the NFC Forum Type 3 Tag standard and operates at 13.56MHz.

Speed Class 10 FlashAir III cards are available in 8GB, 16GB and 32GB capacity options. In addition to supporting access from web browsers, these cards incorporate WebDAV support to provide improved photo management functionality for PC and MAC users. Up to seven devices can wirelessly access the FlashAir III cards simultaneously. The built-in wireless access point also allows for transfers to Wi-Fi-enabled smartphones, tablets, laptops and PCs without the need of an Internet connection. An Internet pass-through feature allows users to access the Internet via a separate wireless router while connected to the card to enable photos and videos to be uploaded to the Internet and shared on social networks.

The NFC SDHC card as well as the FlashAir III Wireless SD card are backed by a five-year standard limited warranty. Pulse is expanding its EFD15 portfolio, known for its versatility in DC/DC converter applications, with …