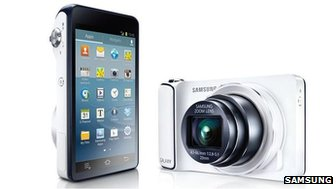 Samsung and Sony have used this year’s IFA trade show in Berlin to unveil a host of new devices. Samsung has launched a new range of Android and Windows-powered touch screen devices while Sony unveiled a new 20-inch (51cm) Android-powered device which it said was “splash-proof” and thinner than its previous models. It also launched a computer – designed to run Windows 8 – that comes with a sliding hinge that enables the device to switch between tablet and laptop modes.

Among the new models from Samsung are a number of firsts: a Windows RT tablet; a Windows Phone 8 smartphone; and an Android-powered camera. The company also announced an update to its Galaxy Note model – the “phablet”.

The announcements come just a few days after Samsung lost a patent lawsuit to Apple and was ordered to pay $1bn (£663m) in damages.

Samsung”s new line-up also includes a 10.1in (25.7cm) touchscreen tablet which uses an ARM-based chip and the RT version of Windows 8 as well as a number of Intel-based Slate models that run the full version of the system and function as hybrids – operating as either standalone tablets or laptops when added to keyboard docks.

The Korean giant also used IFA to show off the ATIV S, the company’s first smartphone to run Microsoft”s Windows 8 Phone system. It has a 4.8in (12.2cm) display which will make it one of the bigger models on the market.

For Sony IFA is offering it a chance to effectively relaunch its tablet computing efforts which up until now have been disappointing. The latest Xperia tablet follows other models that were released in April 2011.

In Berlin Sony also showed off what it described as a “family touch” design. The Windows 8-powered Vaio Tap 20 touchscreen computer has a built-in stand and can be used either upright with a keyboard, or laid back flat against a table. At 20 inches the screen is much larger than traditional tablets. The company said that it was designed to be used by more than one person at a time., giving the example of children drawing on its screen while sitting on opposite sides of a table.