RS Components (RS), the trading brand of Electrocomponents plc, the global distributor for engineers, has announced that it will be a silver partner at the upcoming Maker Faire – The European Edition. Held annually, the event is the largest Maker Faire in Europe and is taking place in Rome at the ‘Fiera Di Roma’ from Friday to Sunday 1-3 December 2017. 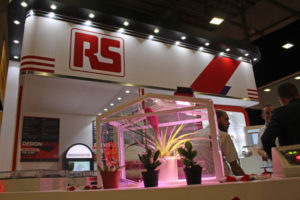 RS will be showcasing its DesignSpark community for engineers, makers, hobbyists and students. This will include a look at a selection of the community’s key projects and how makers of all ages and abilities can utilise DesignSpark’s free software, tools and resources. RS Pro and Pi Top will also be featured on the stand.

Maker Faire is a celebration of the maker movement and attracts makers, engineers, students, hobbyists and enthusiasts of technology in general, as well as families and people of all ages. Introducing ideas that come from the realms of science, science fiction, technology, entertainment and business, the event draws in people that are simply curious about making things and come to see creativity and innovative inventions from 3D printing to wearables, through to drones, robots and digital manufacturing.

The Maker Faire events originated in 2006 in the San Francisco Bay Area as a project created by the editors of ‘Make: magazine’ – a US-based magazine that focuses upon do-it-yourself projects based on electronics, computing and robotics, as well as metalworking and woodworking. Maker Faire has since grown into a worldwide network of both flagship and independently produced events. Last year’s Maker Faire event in Rome featured more than 600 inventions on display and attracted more than 110,000 visitors, making it the world’s largest Maker Faire event after the Bay Area and New York editions in the US.

“We are proud to be a silver partner of Europe’s largest Maker Faire event,” said Mike Bray, VP of DesignSpark at RS. “Supporting and engaging with makers and innovative creators from across the world, and championing STEM learning events, is a key element of the RS mission to help inspire the engineers of tomorrow.”

RS will be exhibiting on stand C11 in Pavilion 7 at Maker Faire Rome.