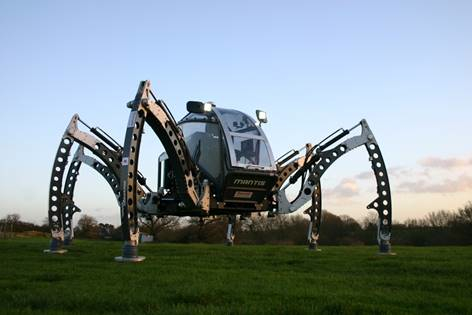 RS Components (RS), the trading brand of Electrocomponents, the global distributor for engineers, is supporting innovation by providing sponsorship for a robot creation built by inventor Matt Denton, an electronics specialist within TV and film. The Mantis, a two-tonne turbo diesel-powered hexapod walking machine, brings together art and engineering, and will feature on Channel 4’s Gadget Man on 22nd June.

Matt, founder of Micro Magic Systems, has 20 years’ experience primarily within creature effects departments on sci-fi and fantasy films, such as the Harry Potter series and Prometheus. He has built the machine using components predominantly from RS, and has taken it to festivals and events where it has received media attention, as well as being driven by The Gadget Show’s anchorwoman Pollyanna Woodward when it was featured on the show in December.

The inventor was inspired to create robots, in particular six-legged walking machines, having been a huge fan of sci-fi movies from a very early age. He honed his skills in electronics and computer software during his years of working in film and made his first small hexapod robot in 2001.

He refined the designs and software over many more prototypes and built the Mantis after being approached by a company which was interested in large-scale hexapod control software, fuelling his desire to build a hydraulic-actuated hexapod big enough to pilot or take large scale tooling. He then secured a business partner and funding for the Mantis project.

Matt said: “I have used a variety of components from RS in the building of the Mantis, from electronic and electrical enclosures, connectors and cable, to hardware such as nuts and bolts – and there is an RS oil filter visible in the engine bay. A four-channel closed loop hydraulic valve controller was fitted, based on a microchip dsPIC micro. There is one of these for each leg, all connected via a CAN bus back to the main control computer (HexEngine).

“Anyone who works within design engineering knows the RS brand and no doubt uses them on a daily basis. In my line of work where most things I get to build, including the Mantis, are usually prototypes, we never have much time and the specification changes on a daily basis. RS is invaluable as a one-stop-shop for quick delivery of pretty much anything needed. It’s great to have RS sponsoring the Mantis, as there are some events I have been invited to that I have had to turn down due to lack of funds, so this support opens up more possibilities for future events.”

Whilst the Mantis has thus far been used for promotional work at technical or engineering events and various TV appearances, there are many possible uses for hexapod technology. It weighs approximately 1900kg, yet when all six feet are in contact with the ground, the ground pressure applied is roughly the same as an average male human foot, meaning it treads very softly and does little damage to the terrain. This technology is now being considered for the creation of bore test holes in various locations within the Brazilian rainforest for possible mine sites.

Pete Wood, RS DesignSpark manager, said: “We’re delighted to be involved with the Mantis, supporting innovation and giving our DesignSpark community inspiration and something great to engage with. Matt’s determination and drive are admirable and we wish him and the Mantis great things for the future – it’s been well received so far and we’re sure they’re destined for real stardom.”