Wide range of content now available in French, as well as continued ability to share know-how and information, along with access to free DesignSpark CAD tools and huge range of other design resources

RS Components (RS), the trading brand of Electrocomponents plc, the global distributor for engineers, has announced a significant expansion of DesignSpark with the launch of a French version of the online engineering community, enabling French-speaking customers to engage with other engineers and to access content and tool support in their native language.

DesignSpark now has more than 570,000 members in more than 200 countries, enabling them to engage with fellow engineers globally through comments, questions and the contribution of articles. Launched in July 2010 and initially available in the English, German, Japanese and simplified Chinese languages, the DesignSpark ecosystem offers online design resources and free downloadable tools to professional engineers, makers, hobbyists and students. The French version of the site is the first new language version introduced since the inception of DesignSpark just over seven years ago.

The complete suite of free-for-download CAD tools is accessible via all language versions of DesignSpark, including: DesignSpark PCB, which is a professional-grade schematic-capture and PCB design tool; DesignSpark Mechanical, an advanced 3D CAD tool based on direct modelling techniques; and DesignSpark Electrical, a fully specified electrical CAD package for the design of control panel, machinery and electrical systems.

In addition to an area for collaborating on ideas and designs, members can also access the DesignSpark resource centre to gain access to Obsolescence Manager, an online tool that helps manage the problem of component obsolescence; RS Toolbox, an app that provides easy access to popular electronic reference materials and calculation and conversion tools in an easy-to-use format; the PCB Part Library, which enables the creation of circuit diagram symbols and PCB footprints; and the Product Data Library, which holds more than two million part numbers from more than 500 manufacturers with five million individual pieces of technical documentation and CAD files to support the design process. 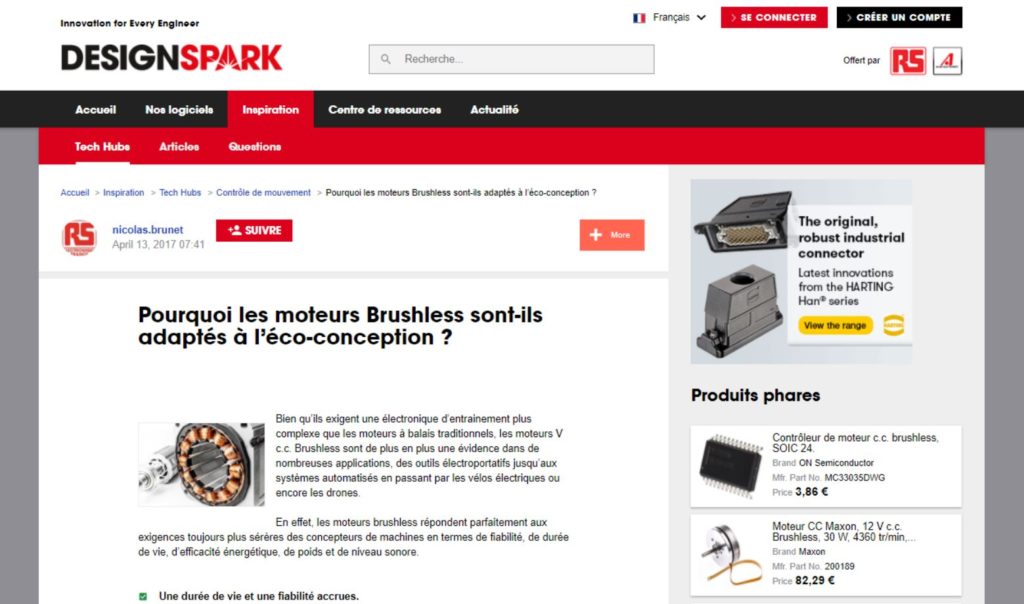 The new French-language site contains more than 50 technical articles, which currently fall across eight different tech hubs on the DesignSpark site. These hubs include the areas of electronics design, Internet of Things, LED lighting, motion control, machine safety and workbench, as well as the platform-specific hubs of Arduino and Raspberry Pi. Further content in French language will continue to be added.

The DesignSpark community is available at www.designspark.com.