RS Components (RS), the trading brand of Electrocomponents plc, the global distributor for engineers, has announced the launch of the DesignSpark Raspberry Pi Pmod (Peripheral Module) HAT adapter board. Manufactured by Digilent, the Pmod HAT adapter enables users of the highly popular credit-card-sized computer to rapidly develop electronic design prototypes. The Pmod adapter breaks new ground for RS: it is the first DesignSpark-branded product released in conjunction with one of its suppliers. 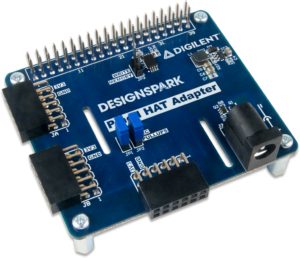 DesignSpark is an online engineering community, which can be accessed at www.designspark.com and provides free software design tools and a host of other development resources to students, developers, and makers, enabling the quick development and prototyping of project ideas and product concepts. A relevant example from a community contributor is www.rs-online.com/designspark/easy-peasy-peripheral-interfacing-with-pi-python-and-pmods

The DesignSpark Pmod HAT adapter is a plug-in peripheral module that enables rapid prototyping without the need for soldering, saving time and cost in PCB development and project timescales. As outlined in the above DesignSpark article, the board is supported by some examples of Python software code, which have been developed specifically around analogue Pmod functions to help the Raspberry Pi user community develop real-world instrumentation, monitoring and control applications.

This new Pmod adapter for the Raspberry Pi follows the launch of the Pmod Shield-Uno adapter for the Arduino and PSOC6 platforms. These Pmods, or peripheral modules, can quickly turn standard development kits into functional prototypes. The product also brings Digilent’s Pmod modules and shields to a significantly wider user base, as they can now easily be used with both Pi-, Cypress PSOC users, and Arduino-R3 based development projects. Previously Pmods were used with FPGA development boards and a small selection of microcontroller development kits.

The DesignSpark Pmod adapter can be used with a wide selection of Raspberry Pi models including the: Model A+, Model B+, Pi 2 B, Pi 3 B, and the Zero and Zero W versions. It also allows users to interface with a multitude of Digilent Pmods that are also available from RS, such as: the PmodAD1 two-channel 12-bit ADC module; the PmodISNS20 high-accuracy Hall Effect current sensor; or the PmodOLEDrgb, an organic RGB LED module with a 96×64 pixel display and 16-bit colour resolution.

Specifications of the adapter include: 40-pin Raspberry Pi GPIO (General-Purpose Input/Output) header, with 26 3.3V-compatible GPIOs; support for SPI, I2C and UART connections; a 16mA current limit for all PMOD GPIOs; and a 5V barrel jack for external power.

The DesignSpark Pmod HAT adapter for Raspberry Pi is now shipping from RS in the EMEA and Asia Pacific regions.