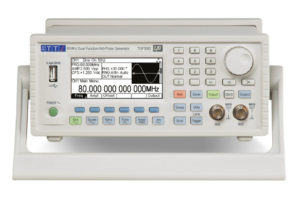 The launch also celebrates the working partnership between RS and Aim-TTi, which has been ongoing now for 40 years. During this time, Aim-TTi has built a reputation for innovation and enhancement and is one of the leading producers of general-purpose electronic test instruments and laboratory power supplies in Europe.

The TGF3000 series is the latest function/arbitrary waveform generator series and delivers a frequency capability of up to 160MHz, combined with two identical full-performance channels that can operate as independent generators or in coupled or tracking modes. The series also delivers precise channel-to-channel phase control with a resolution of 0.001°.

Other features include high resolution performance and the capability to generate low jitter pulses as well as wide-bandwidth white noise. In addition, an extensive array of modulations is available with gated, burst and sweep modes that are able to use either internal or external trigger sources.

On the launch of the new TGF3000 series, Mark Edwards, managing director at Aim-TTi, said: “Going back to 1978 when we first began working together with the launch of the PL series of digital power supplies, through the Thurlby Thandar merger in the late 1980s and beyond, our relationship with RS has always been a highly synergistic one. It has continued to evolve to deliver the benefits from our cooperation and the highest possible levels of service to engineers who are working in product design and development, and bench test environments.”