Rohde & Schwarz is ready for Bluetooth 5

To coincide with Bluetooth Release 5, Rohde & Schwarz has expanded the functional range of its line of R&S CMW wideband radio communication testers to cover the new specification. The R&S CMW software encompasses all RF tests needed for development and production, including the new test cases for Bluetooth SIG precertification. 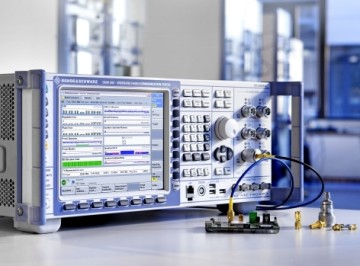 The Bluetooth Special Interest Group (SIG) has specified new low-energy (LE) features in Bluetooth 5 that are tailored primarily to Internet of Things (IoT) applications. A key criterion for these applications is the lowest possible power consumption. An option is now available that makes it possible to quadruple the range of Bluetooth connections by transmitting data multiple times. The new specification permits transmission speeds of 1 Mbit/s and now also 2 Mbit/s. The new, optional stable modulation index has been integrated into the Rohde & Schwarz test software.

To permit testing of Bluetooth 5 chipsets and modules, Rohde & Schwarz is bringing software options to the market concurrent with the release of Bluetooth 5. These options, which are activated on R&S CMW testers via license keys, make it possible to perform all RF measurements that are needed for development and for Bluetooth certification.

The R&S CMW-KM721 software option is used to measure power, modulation and adjacent channel power (ACP) on the transmitter. With the R&S CMW-KS721 software option, receiver measurements can be performed to determine the packet error rate and receiver sensitivity. These options permit manual operation with a multitude of setting options and parameter adjustments. Complementary to these options, the R&S CMWrun automation software is available for running RF tests in remote control mode, allowing R&S CMW testers to perform all new test cases at extremely high speed.

Support for Bluetooth and other wireless standards

The instruments now cover all RF tests defined by Bluetooth SIG, from Bluetooth Basic Rate V1.2 all the way to the new Bluetooth 5 specification for low energy. Manufacturers employ this test solution for development, production and precertification tasks. Accredited test houses likewise rely upon test solutions from the R&S CMW platform in their test systems for Bluetooth certifications. Since Bluetooth is often deployed together with other wireless technologies, it makes sense to use interoperability tests on all supported wireless technologies on these instruments and systems. The R&S CMW testers are currently the only products on the market that deliver RF tests on Bluetooth and cellular radio signals such as LTE-A, WCDMA, GSM and CDMA2000, as well as non-cellular radio signals such as WLAN, ZigBee and GNSS, using a single instrument.

The new R&S CMW-KM721 and R&S CMW-KS721 Bluetooth options are now available for all models of the R&S CMW platform. Customers who already own an R&S CMW can activate the options by means of license keys.