The new R&S RT-ZVC multichannel power probe, in combination with an R&S CMW radio communication tester, monitors the power consumption of chipsets, radio modules and mobile devices. It is the only solution available on the market that can correlate battery consumption data with RF signalling events. And it accomplishes this with a measurement resolution of 18 bits, making measurements in the nanoampere range possible.

Long battery life is a key criterion for mobile devices as well as for embedded systems and chips for Internet of Things and machine-to-machine applications. Rohde & Schwarz now provides a complete solution for testing battery life in all operating modes. It consists of an R&S CMW radio communication tester, the new R&S RT-ZVC power probe and the R&S CMWrun sequencer software. 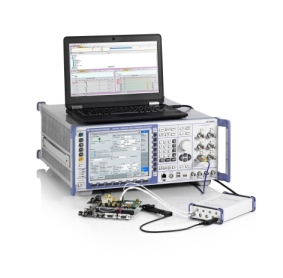 The radio communication tester manages the communications with the DUT and also places the DUT in the various operating modes. The power probe acquires current and voltage readings at defined test points on the DUT. The sequencer software controls the entire process and delivers detailed measurement reports to the user. The user can precisely correlate the events occurring at the mobile interface with the DUT’s power consumption. Thanks to the R&S RT-ZVC probe’s high dynamic range, this is possible over the entire measurement range – from low currents in standby or sleep mode to large currents when the DUT transmits at maximum power.

The multichannel design of the probe makes it possible to simultaneously acquire and correlate the power at up to four different test points. Users can therefore compare the power consumption of individual subcomponents, such as an application processor, the RF transmit unit and other components, against the total power consumption within a realistic signalling scenario controlled by the R&S CMW500.

The power probe was designed specifically for the R&S CMW family of radio communication testers. When used in combination with the R&S CMWrun automation software, long-term monitoring of automated signalling test scenarios is possible, as needed for performance tests, regression tests and acceptance tests. Even the test scenarios for the new 3GPP features for reducing power consumption in machine-to-machine applications, such as power save mode (PSM) and enhanced discontinuous reception (DRX), can now easily be measured and correlated. The solution supports all prevalent mobile communications technologies with connections in test, voice and data transfer mode.

Acquire current, voltage and power at 5 Msample/s in the maximum dynamic range

The R&S RT-ZVC has a multichannel design. It measures power by taking a voltage and a current reading and then multiplying them in realtime. The power probe also automatically calculates the minimum, maximum, average and RMS values for the voltage, current and power. The probe is available with two or four power measurement channels. The individual current and voltage signals are sampled at five megasample per second (Msample/s), for a time resolution of 200 ns for each reading. As a result, even the smallest, most transient of signal changes can be acquired, as needed for example, to specify the start-up behaviour of chip components.

The R&S RT-ZVC is designed for input voltages of ±15 V, and the measurement range for input currents can be varied from 4.5 µA to 10 A. A vertical resolution of 18 bits for sampled signals makes it possible to cover the required dynamic range e.g. from nA to A. The power values calculated by multiplying the current and voltage pairs are averaged (method selectable by the user) and then output over the integrated USB interface. This keeps the data volume under control even for long-term acquisitions.

The R&S RT-ZVC used in conjunction with an R&S CMW communication tester and R&S CMWrun is therefore ideal for battery consumption tests, for example in the development phase using an external battery or in a later phase using a variety of real batteries. The power probe can also be used for analog radios when combined with an R&S CMA tester.

The R&S RT-ZVC power probe is now available from Rohde & Schwarz as a two-channel or four-channel model.