The Rigado gateway’s new Ubuntu Core offering provides a platform for the development of sophisticated control, monitoring and tracking applications for use in offices, restaurants and hotels, schools, hospitals and other commercial operations

Rigado has announced that it is deploying Canonical’s Ubuntu Core operating system on its Vesta IoT gateways in a move to ease implementation of secure edge computing and cloud connectivity applications in commercial environments such as restaurants, hotels and offices. 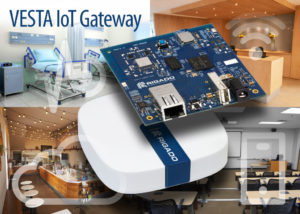 Rigado’s family of commercial IoT gateways provides an off-the-shelf, scalable means to connect sensors and objects such as asset tags, smart lights and building controls to cloud applications and platforms, as well as to run control and monitoring applications locally. Vesta gateways provide:

Unit pricing of the Vesta gateways, which starts as low as US$99, makes mass IoT deployments economically viable in the commercial sector. Rigado’s Vesta gateway eliminates the cost barriers that deter commercial IoT users from implementing systems based on more complex industrial IoT gateways that are designed to support more interfaces and a wider range of compute-intensive process and machine control applications.

Now Rigado has extended the advantage of its commercial IoT gateways with the announcement that they will ship with the proven, secure Ubuntu Core, replacing an earlier Yocto Project-based Linux distribution. The open-source Ubuntu Core software developed by Canonical provides migration, management and support services for application deployment.

The Vesta gateways themselves include a secure boot function and encrypted file systems. This protects the integrity of the code and data on the gateways, and prevents unauthorised code from being loaded on them.

Every instance of Ubuntu Core on a Vesta gateway is fully supported by the Canonical security and update service. Updates and software installations are managed through the Rigado DeviceOps web interface or through application programming interfaces, and are delivered through the Canonical IoT app store. This provides operators with ability to remotely control the software loaded on an entire fleet of Vesta gateways installed anywhere in the world.

Kevin Tate, chief marketing officer of Rigado, said: “The Rigado IoT gateway is specifically designed for commercial IoT deployments, offering the sophisticated edge computing capabilities of more expensive gateways while offering the ease of implementation and installation that home-grown designs based on a general-purpose development system fail to provide.

“Now with the trusted Ubuntu Core software on-board, Rigado can offer users an easier and more secure platform for developing applications to run at the edge or in the cloud.”