Renishaw wins Company of the Year category at the NMI Awards

Global engineering technologies company Renishaw was awarded the prestigious Company of the Year Award at the 2016 NMI awards, held at London’s Bankside on November 17th. The company was recognised for its commitment to research and to developing people within the business.

The awards are an annual event hosted by the NMI, the UK trade association representing the electronic systems, microelectronics and semiconductor communities. The awards celebrate the year’s key electronic innovations, people and companies from across the UK and Ireland. The evening also saw the trade body’s 20th anniversary celebrations and a presentation from Rt Hon Matt Hancock MP, the minister of state responsible for digital policy. 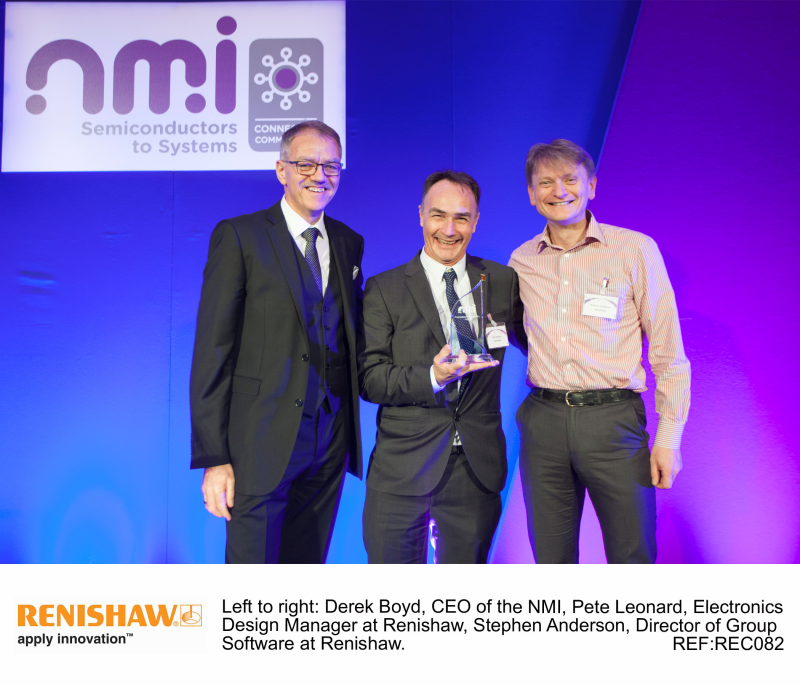 “This year’s winner is considered to be a hidden gem in the Great British crown,” explained Derek Boyd, CEO of the NMI. “Renishaw is a world leader in additive manufacturing and the only UK business that makes industrial machines using metal powder. It supplies products and services in applications as diverse as jet engine and wind turbine manufacture to dentistry and brain surgery.

“With 16 per cent of revenue spent on engineering and R&D, it also has a commitment to the future and excellence,” continued Boyd. “It is very encouraging to see that people are a significant element of Renishaw’s strategy and long term plan.”

“This award recognises Renishaw as a forward-thinking engineering company that supports its employees, future employees and new product design and development,” explained Pete Leonard, electronics design manager at Renishaw. “Renishaw offers engineering and product solutions and is committed to developing a pipeline of engineering skills in the UK.”

The NMI supported Renishaw in its development of the Embedded Electronic Systems Design and Development Engineering Apprenticeship as part of the Trailblazer apprenticeship scheme. Pete Leonard, electronics design manager at Renishaw sits on the NMI’s Field Programmable Gate Arrays (FPGA) Frontrunners board contributing in-depth application specific knowledge to develop a strategy for communicating the best technologies to industry.

Renishaw is one of the world’s leading engineering and scientific technology companies, with expertise in precision measurement and healthcare. The company’s success has been recognised with numerous awards, including eighteen Queen’s Awards that celebrate the company’s achievements in technology, export and innovation.