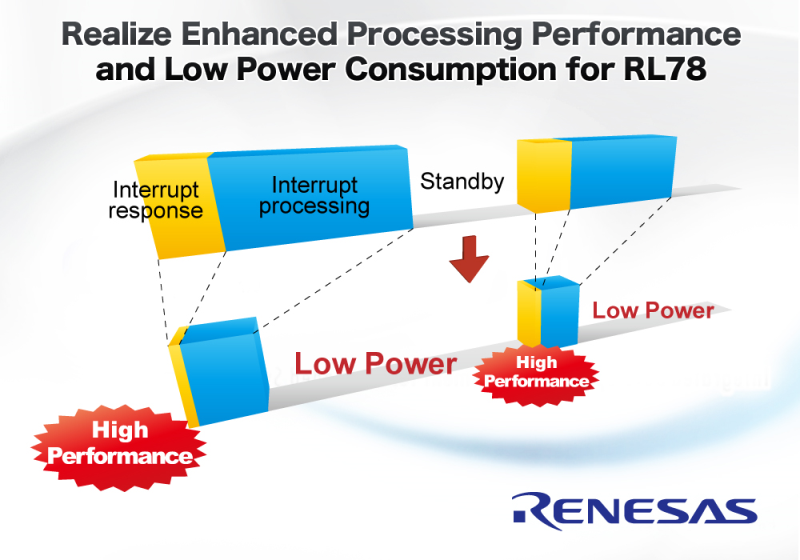 Renesas Electronics, a supplier of advanced semiconductor solutions, has announced the availability of the CC-RL C compiler, a development environment for the RL78 Family 16-bit microcontrollers (MCUs) widely used in the home appliances, industrial, and automotive systems.

Recently, increased diversity and performance of functions provided by systems that include motors, such as home appliances or industrial equipment, have become strongly desired. This has resulted in demand for increased processing speed in the MCUs used. At the same time, since even longer operating times are required in battery-operated equipment such as health care equipment and fire detectors, there are increasing demands for reduced power consumption in the MCUs used. Renesas’ new CC-RL C compiler takes advantage of the low-power capabilities of the RL78 Family and furthermore achieves increased processing performance to respond to these dual needs for high performance and low power consumption.

The new compiler can be used in combination with the e² studio (eclipse embedded studio) integrated development environment which is becoming more widely used on a global scale.

The most significant feature of the CC-RL C compiler is the improvement in MCU processing performance it achieves. The performance of programs coded in standard ANSI C, is significantly improved as compared to the existing Renesas compilers, without any changes to the code itself. Furthermore, the interrupt response performance, which is critical at the system level, is improved by up to six times. These performance improvements can contribute significantly to higher performance in application systems. Additionally, the CC-RL compiler includes porting support functions for porting from earlier compilers. This allows the users to make effective use of existing software assets.

The new compiler contributes to reduced power consumption in user systems by significantly increasing processing performance. Most systems alternate between running in the normal state and waiting in the standby state, where almost no power is consumed. Due to the speed improvements described in item (1) above, the time spent in the normal state is reduced, and the time spent in the standby state increases by that amount. This allows the MCU’s power consumption to be reduced. Furthermore, the CC-RL C compiler generates code that is 10% smaller than that generated by earlier Renesas C compilers. This allows even more functions to be included in systems and thus can contribute to increased added value in application systems.

The CC-RL C compiler includes functions for checking items in the MISRA-C:2004 guidelines. Since these checks are performed automatically at compile time, missed checks and incorrect file specifications are prevented. Thus these functions can correct all coding that violates the guidelines. Note that the CC-RL C compiler is available in a standard version and a professional version, and that the MISRA-C checking functions are only included in the professional version.

Renesas intends to continue to release MCU integrated development environment tools that contribute not only to increased efficiency in customer development activities, but also to improved performance and reliability and higher added value in user application systems.