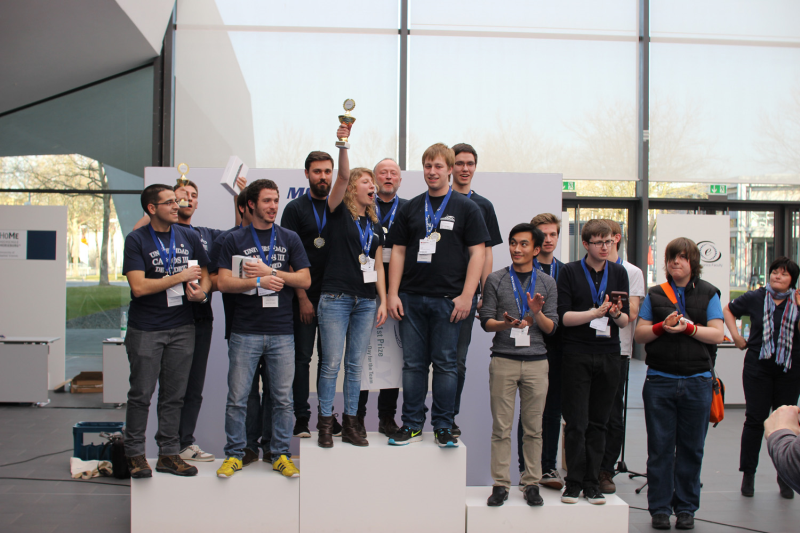 Renesas Electronics Europe has announced the winners of its MCU Car Rally competition for university students, which was held on February 26th at embedded world 2015 in Nuremberg, Germany. Seventeen teams comprising some 100 students from all over Europe participated in the event by developing a functioning model rally car based on sensors and other electronic components from Renesas.

First past the post with a time of 3.54.6 minutes for five full laps was the model built by the West Coast Racers team from Fachhochschule Westküste in the very northern part of Germany. Second was the TOR CAMVI team from the Carlos III University in Madrid, whose model completed five laps in 3.57.4 minutes. The UoG Car Team 2 from England’s University of Gloucestershire came in third with a time of 4.52.1 minutes. Prizes for the winners included tickets for a driver training course at well-known racing circuits as well as iPad Minis and Amazon vouchers.

Along with good communication and teamwork skills, the Renesas MCU Car Rally sharpened  the students’ knowledge of electrical circuitry and electronic control systems as well as the development and tuning of the drive and control software. Most of the students are already in their second or third years at college and are likely to be entering the industry within the next year or two. As such, the Renesas MCU Car Rally gave them useful experience in the development of a functioning product and the project also counted towards their degree work.

Working with its Platinum Alliance Partner AND Technology, Renesas staff welcomed the students on arrival and provided them with technical and setup support where necessary. The racing slots were decided by lottery during a hearty dinner at a traditional Nuremberg bratwurst restaurant, which helped the participants relax and get to know each other. Executives from Renesas’ headquarters in Japan were present to wish the students luck and impart some useful technical tips.

“Our first MCU Car Rally event was a great success and we had fantastic feedback from the participants,” commented Andy Harding, senior manager, Industrial & Communications Business Group, Renesas Electronics Europe. “We’ll soon be sending out invitations to European students to participate in next year’s Renesas MCU Car Rally at embedded world, which we’re hoping will be even bigger and more successful than this year’s!”