The newly developed technology is an Intelligent Motor Timer System (IMTS), a dedicated circuit block that can be integrated into automotive microcontrollers (MCUs) for next-generation electric vehicles (EVs) and hybrid electric vehicles (HEVs). It performs field-oriented-control operations, which are essential to EV motor control, in a mere 0.8 microseconds (µs), the world’s fastest rate, as of February 7 2017 according to Renesas, which is less than 1/10 the operation processing time of software implementation on a CPU running at the same operating frequency. This contributes to the realisation of next-generation high-speed EV motors with excellent energy efficiency and inverter systems with high-speed switching performance to drive them. 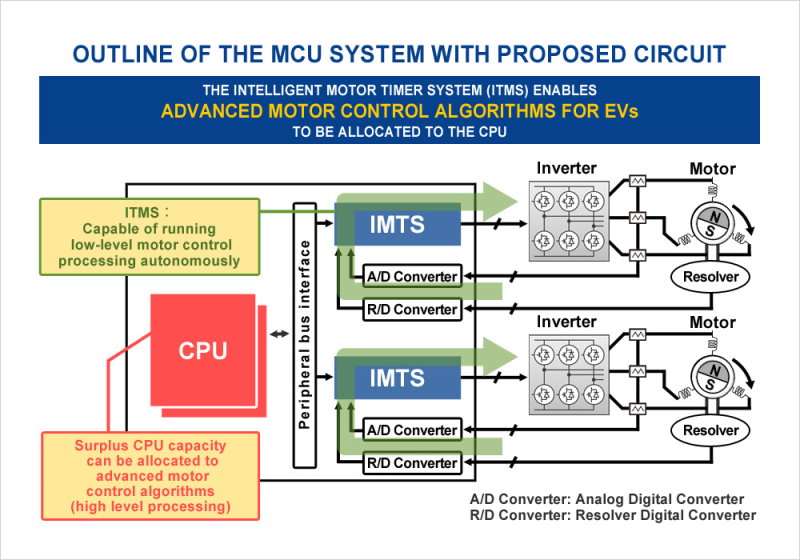 With the increasingly stricter fuel efficiency requirements in the recent years, EVs, HEVs, and plug-in hybrid electric vehicles (PHEVs) have come to account for an increasing share of the total number of vehicles produced. To increase the range of such motor-driven vehicles, it is necessary to boost the energy efficiency of motor control.

To achieve this, it is important not only to make mechanical improvements to the motors themselves, but also to enhance the functions and performance of the electronic control units (ECUs) that control the motors. ECUs capable of supporting next-generation EVs, HEVs, and PHEVs require advanced functionality and complex control software, and this results in a substantial increase in the operation processing load placed on the MCUs used in these ECUs. At the same time, automotive MCUs required to restrict the amount of heat they generate in order to maintain a high level of reliability in high-temperature environments. It is therefore necessary to keep the operating frequency of the MCUs’ internal circuits, including the CPU core or cores, relatively low, making them difficult to boost performance.

In response to these needs, among the various motor control processes performed by the MCU, Renesas implemented the IMTS as a dedicated circuit block for static processes requiring a high level of responsiveness such as acquisition of sensor data, calculation of control values based on it, and outputting of these values. The IMTS is independent of the CPU and capable of running autonomously, thereby substantially reduces the CPU load of the motor control MCU. The resulting surplus CPU capacity can then be allocated to advanced motor control algorithms designed to boost the energy efficiency of next-generation EVs, HEVs, and PHEVs.

Motor control requires a succession of static processing involving field-oriented-control operations, in which the motor current value and angle value are acquired during each control period managed by the MCU’s internal timer circuit and control values are determined for the next control period; and PWM output generated based on the control values. When multiple types of motor control are operating at the same time, the resulting processing load can consume up to the equivalent of up to approximately 90 per cent of the capacity of the CPU in a Renesas 40 nanometer (nm) automotive MCU operating at 320 MHz. The newly developed IMTS is a dedicated circuit block for these field-oriented-control operations, which exact a heavy operation processing load. It is also configured in a tight linkage with a dedicated motor control timer circuit, resulting in a system in which the succession of processing performed during each control period managed by the timer circuit, from obtaining the current value and angle value to PWM signal output, all takes place autonomously, independent of the CPU.

This means that the entire CPU load previously required for the above processing is eliminated, and the CPU capacity freed up in this way can now be allocated to software containing advanced control algorithms designed to boost energy efficiency.

By providing a dedicated circuit for field-oriented-control operation processing, the IMTS reduces the operation processing time to 0.8 µs, which is less than 1/10 that of software implementation on the CPU. Processing performance made possible by the new technology is sufficient to meet the demands of inverter control with high-speed switching (performance example: switching frequency of 100 kilohertz (kHz), control period of 10 µs) utilising power devices fabricated from new materials such as silicon carbide (SiC), which are on the horizon for next-generation EV motor control.

Automotive powertrain control must assure functional safety so that if a component should fail, the system will sense this and transition automatically to a safe state. This has generally been accomplished by using two MCUs to provide system redundancy, or by using a MCU with redundant internal circuits, which could relatively lead to increased costs.

The newly developed technology uses a MCU with two CPUs in a lockstep dual-core configuration that regularly monitors the internal operation of the IMTS circuit. This approach keeps the cost down while also achieving high-speed control and functional safety. Assuring functional safety places a load on the CPU, but in practical use cases this is estimated to amount to only 2.4 per cent of the CPU’s total processing capacity. 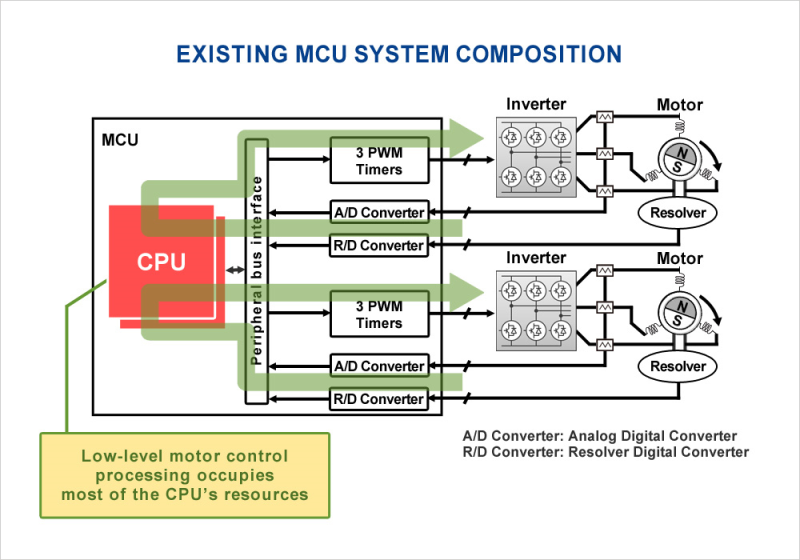 To realise high-precision MCU with highly accurate operation processing, it is essential to acquire highly accurate sensor signal values. Nevertheless, it is impossible to avoid errors from a variety of sources, such as errors caused by the mounting position of the sensors. The newly developed IMTS has a configuration that makes it possible to correct errors in real time using software developed by the user. In addition, the IMTS performs this processing autonomously, so correction processing imposes no load on the CPU. The corrected sensor signal values are used for motor control operations, resulting in more accurate operation processing and better energy efficiency when operating the motor.

Renesas is now testing a prototype 40nm MCU with on-chip flash memory that incorporates the new technologies. It uses an actual motor drive system to confirm operation in an actual system. Renesas aims to contribute to the realisation of more energy efficient ECU systems for EVs, HEVs, and PHEVs through the use of this dedicated motor control circuit technology.