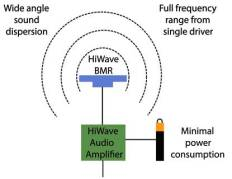 The demonstrator, called Tempus, was first shown at CES earlier this year and again at The International Loudspeaker Association’s Winter Symposium. It brings together an all-new variant of HiWave’s BMR (Balanced Mode Radiator) speaker drive unit and its Audium amplifier chip in a reference design that includes Bluetooth wireless audio streaming.

A transparent enclosure enables engineers to view the simplicity of the structure that encapsulates the BMR drive unit and the electronics module based on HiWave’s Audium amplifier chip. Pairing the speaker with any Bluetooth enabled phone or tablet produces a clarity, range and depth of sound that belies the unit’s physical size.

The Audium amplifier chip exploits the fact that the peak-to-average power ratio of speech and music is around 15dB, or 32:1, so the average power is very low. Three main techniques are combined to achieve very high efficiency. First, it uses a low (voltage) supply architecture or LSA. The amplifiers starts low, by taking a low supply voltage, and stays low, by using this low voltage throughout most of its circuitry, including the power stage, for most of the operating time. When reproducing signal peaks demands a higher rail voltage on the output stage, this is provided by a boost converter that takes the operating voltage up to 32V. Since the converter is only used for a small proportion of the time, any power conversion losses have little effect on the amplifier’s average efficiency.

Second, the device uses a proprietary rail tracking and switching algorithm to change the output-stage rail voltage depending on the audio envelope. It’s done in a way that avoids objectionable clicks or other audible artefacts as the amplifier transitions from one rail to another.

Third, the output state of the amplifier is switched using a low rate modulation (LRM) schemes that minimise switching losses. This combination means that, at normal listening levels, the amplifier runs for up to 20 times longer than competing products on a single battery or battery charge. The output drive transistors are on-chip, as is a signal processing stage comprising an array of filters than can be configured for EQ (equalisation) to accommodate the acoustics of the enclosures in which designers choose to house their speakers.

The balanced mode radiator in Tempus combines the traditional pistonic action of a conventional speaker with surface excitation that creates bending waves. In this way, the small form-factor transducer creates wide sound dispersion with a nominally flat frequency response over the entire audible range. The transducer surface is flat and its performance is not greatly dependent upon the shape and size of the enclosure, as is the case with conventional speakers. This gives product designers much greater freedom with respect to the shape and size of the enclosure, and the materials used in its construction. In other words, the audio performance is largely enclosure-agnostic.

Bluetooth was chosen for the robust wireless link to give compatibility with most of today’s music players and tablet computers and to maintain low power consumption. Bluetooth operates in the license-free ISM band at 2.402-2.480 GHz, which is shared with other kinds of wireless device in some environments. However, interference is not normally a problem for the same reason that many other Bluetooth devices can operate at the same time in the same environment. The protocol uses adaptive frequency-hopping, spread spectrum technology to minimise interference, and it”s very effective.

Until recently, amplified speakers have either offered low power consumption with severely compromised audio power and quality, or high quality audio with the penalty of very short battery life. Tempus demonstrates that you can now have it all – good quality amplification to over 13W burst power and from a 2.2AH, 3.7V lithium ion battery that power the speaker for more than a day.