The purpose of Industry 4.0 is to intelligently network the numerous links of a process chain. As a result, all steps down to individual sub-processes should be displayed transparently to be analysed in detail. The goal is to control the processes fully automated and optimised and to bring products and services to the market with maximum efficiency.

To achieve this goal, computer programs need key data and as much as possible. Using this data, complex algorithms calculate an optimal process, which may seem unnecessarily complicated and illogical for humans at first sight (random storage for example), but actually helps increasing the output significantly. The key data is ideally collected directly at the source and communicated via internet or intranet to a server that collects – in the sense of Big Data – all available information and then tries to make the most of it. This is the beginning of the Internet of Things (IoT). The oven reports, so to say, more or less directly to the mill, to schedule the appropriate amount of flour, because the factory arranges for producing more bread. 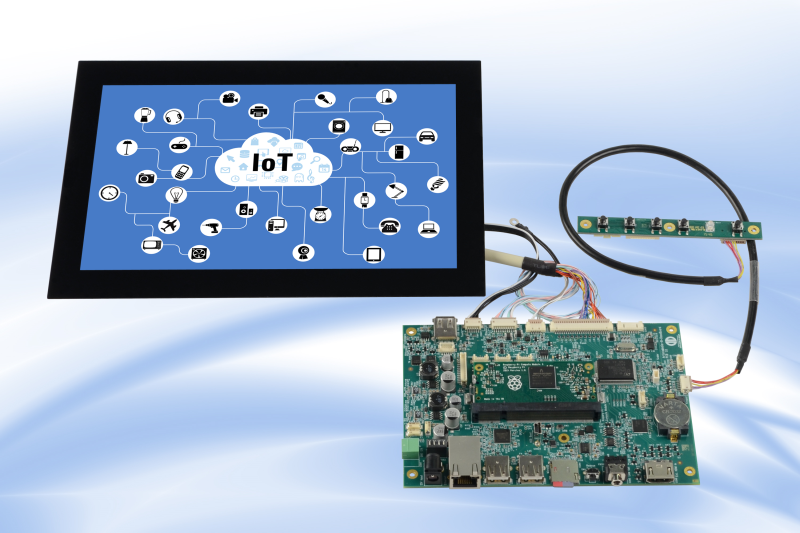 When devices have to get “smart”, they need a ‘brain’ in the form of a microcontroller. The real problem is not finding a chip that takes care of this job. The mainly Asian manufacturers launch new models on a daily basis. The real problem is that medium-sized manufacturers of niche products, not running in very large volumes, do not get appropriate support from the chip manufacturers. The components can be purchased of course, but often the first clear shortcomings already are getting evident in the documentation: registers are described very sparsely or not at all. If you are lucky enough to reach a motivated FAE, you might get register values by e-mail, which solve the current problem but you get no corresponding documentation. Sometimes you have to set registers that are not mentioned in any documentation. The question is: 0x11 solves my problem at the first glance, but wouldn’t perhaps 0x12 be much better for my purpose?

For large companies with huge numbers, this approach may well be the right one. A product is being developed, the chip manufacturer’s FAE tunes it, the product enters mass production and is sold million fold, before the successor is developed and marketed in the same way. The most important thing is that the chips can be purchased at the lowest possible price. But what if smaller providers want to offer several variants of a platform? If the chips are meant to be the basis of a flexible module, the developers have to know the potential of the component inside out to implement new requirements quickly. Industrial projects in medium-sized businesses can start with just a few hundred pieces and still be quite profitable. However having to discuss with a FAE sometimes for a couple of weeks can be very frustrating for developers.

The bottleneck is often neither the education nor the skills of the engineers nowadays, but rather the low chances of accessing a properly documented chip. Of course, many things could also be developed in self-government by clever reverse engineering, but this prevents an attractive time-to-market period. Even a discrete structure of well-known components is often not an alternative, since this is a lot more expensive.

One possible solution to the problem comes from an unusual direction: namely, out of the classroom. The RaspberryPi, designed as an educational and experimental board, has made the leap into industry. The latest version of this very popular platform named ‘Compute Module 3’ or ‘CM3’ guarantees an availability of 6 years. Even users, who found the performance of the old RaspberryPis insufficient, will be very pleasantly surprised by the new model. The small power pack offers enough computing power even for demanding applications. The hardware is extremely flexible due to numerous interfaces. The operating system is, amongst others, the widely used Raspbian, a Debian Linux fork specifically adapted to the CPU of the RaspberryPi. Since the first RaspberryPi module has been launched, all models were compatible and the same OS runs on all versions. Even Windows 10 IoT or Android Things are supported and provide a perfect basis to start your own projects quickly. The main advantage, however, is the outstanding community support: the platform is specified and documented in detail, the software OpenSource. For almost every conceivable problem there is either a solution in the forums or someone can help quickly and easily.

A special feature of the ‘Compute Module’ is that it can be plugged into the socket of a BaseBoard, similar to a RAM memory module. This enables developing own platforms without the hassle of a cable mess. This does not only save production time, but also improves the EMI behaviour and reduces the time required for certifications. Smart solutions are already available off the shelf, e.g. using a scaler chip on the BaseBoard for controlling nearly all common TFT displays comfortably and flexibly directly via LVDS without additional hardware. The main feature is not simply to connect a display, but rather to provide special functions: DICOM Pre-Set for medical applications, colour calibrations, e.g. for maritime applications, gamma corrections and many more can be implemented very simply. The LCD’s backlight can either be controlled automatically via an ambient light sensor or directly by means of an on-screen display with a separate keypad.

The possibilities offered by this platform go far beyond the originally planned training platform. The RaspberryPi has grown up and provides a real chance for small and medium-sized businesses to be part of industry 4.0 and the Internet of Things. Based on it, service providers such as the Data Display Group located in Germering near Munich offer innovative products and services ‘Made in Germany’ in order to simplify the integration into your individual applications and to exploit the full potential of ‘raspberry pi’s’. Plug-and-play starter kits make it easy to get started and can be operated right out of the box, allowing your developers to start immediately and complete their own projects quickly.