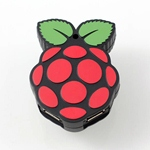 Cyntech Components, a specialist supplier of electro-mechanical components and power supplies, is announced that first production samples of its Pi-themed, USB Hub design have completed formal evaluation and approval by the Raspberry Pi Foundation. Cyntech is now ramping production up and will have units in stock from May.

Cyntech’s powered, 4-Port USB Hub addresses a problem commonly encountered when trying to add peripherals to the Raspberry Pi computer, namely the number of USB ports. As Dave Mellor, managing director of Cyntech Components, explained, “The single-port Model A board clearly has limitations but even the two ports of a Model B board are frequently taken up by the computer’s keyboard and mouse. This means if you want to connect any other USB peripheral, such as an external storage device, camera, printer, etc. you will need a powered USB hub to expand the number of available connections.” He went on to add, “A powered hub is also necessary when using any USB device that requires more than the 100mA current that can be supplied by one of the Pi’s USB ports. And, a further benefit of a powered hub is that it can be used to power the Pi computer through the board’s micro-USB port, saving on the need for a separate mains adaptor.”

Cyntech’s Raspberry Pi USB Hub has been designed to be both practical and attractively styled. Shaped and embossed in the form of the Raspberry Pi logo, the hub has four USB ports arranged around the raspberry body with the power supply connection between the leaves. Rubber feet on the bottom make it less likely to slide around on a desk or other work surface.

The hub meets the full USB 2.0 “Hi-Speed” specification for data rates up to 480Mbps with three of its ports supporting continuous loads of 500mA and in-rush currents up to 800mA, an increasingly important requirement when connecting devices like external hard drives. The fourth port, which provides power to the Raspberry Pi, is rated at 1A to ensure sufficient power for the board and its connected devices.

The USB Hub adds to Cyntech’s range of branded accessories for the Raspberry Pi computer, which includes custom designed enclosures in various colours plus power adaptors (UK 3-pin or Euro 2-pin versions) and a range of cables to fit the board’s various interface connectors e.g. HDMI, Ethernet, USB (type A to B), RCA composite video, 3.5mm stereo audio and a GPIO ribbon cable.